The Architecture & Design Film Festival kicked off in New York this month, celebrating a curated selection of themed movies, events and discussions. It’s been nearly a decade since its inception and architect Kyle Bergman, who founded the fest to expand the dialogue between architects, designers and design-conscious consumers, is hard at work expanding its presence not only across the nation, but internationally as well. Most recently, Seoul, South Korea, hosted a version of ADFF that ran from July through the end of October.

“The event was a nice way to showcase different aspects of architecture and how humans use space for interaction,” says visitor Daniel Ito, an American-born origami artist currently living in Seoul.

Ito notes that most visitors were architects and designers, but the wide selection of films – 24 films showcased in six different programs –  appealed to the general public, too. He points at the vast selection of book subjects – “ranging from the Highline to Korean gardens to Gaudi to meeting places in the American South” — as indicators of ADFF’s diverse audience.

“It is a different version of the festival, which is normally a three- or five-day event that’s very dense,” says Bergman. For this version, Storage Gallery, a space owned by Hyundai Card, asked Bergman to create an ongoing “gallery” of films, which were presented in three small black box theaters. The space also features design, cooking, travel and music libraries.

The idea, Bergman shares, was that “people can go in there for the day and they can see as many films as they want, or they can come back and see films whenever they want…. it’s more of a curated museum program.”

“Seoul is just growing so much,” Bergman continues, “they have a big design biennial happening this year,” and the city was appointed as a UNESCO Creative City of Design. In fact, roughly 73% of all designers in Korea live in the capital, which features a Zaha Hadid-designed cultural hub, the Dongdaemun Design Plaza. 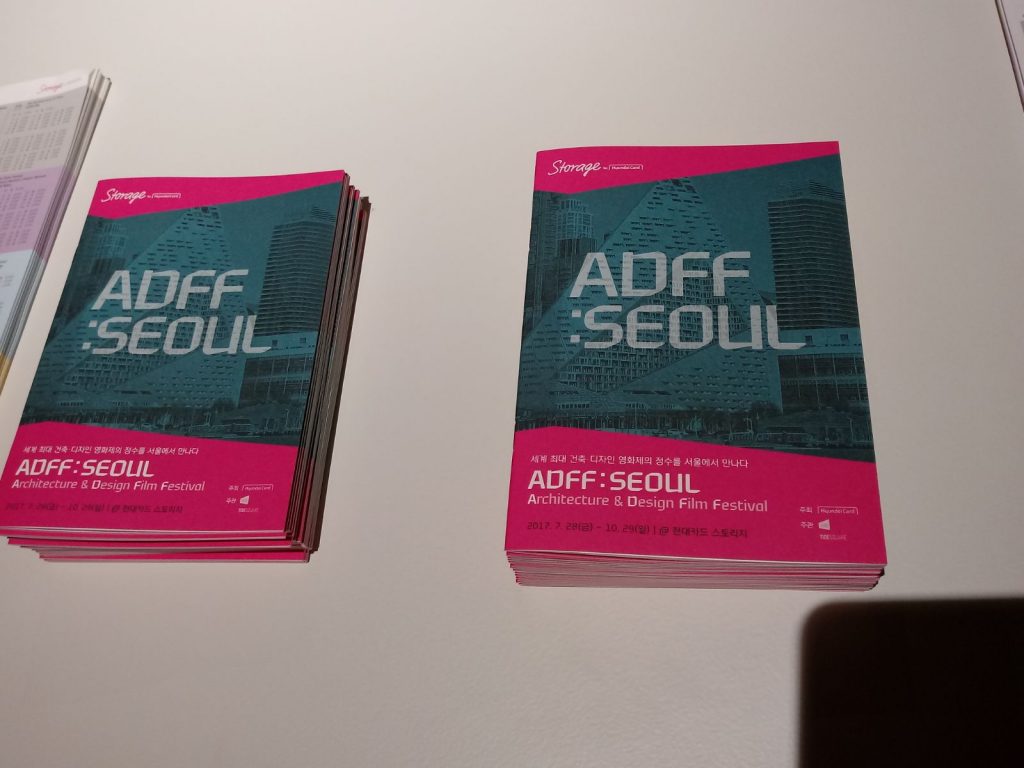 ADFF’s selected films were organized by themes rather than release dates.

“Checking out the festival reminded me of how humans really need space to operate,” says visitor Daniel Ito. 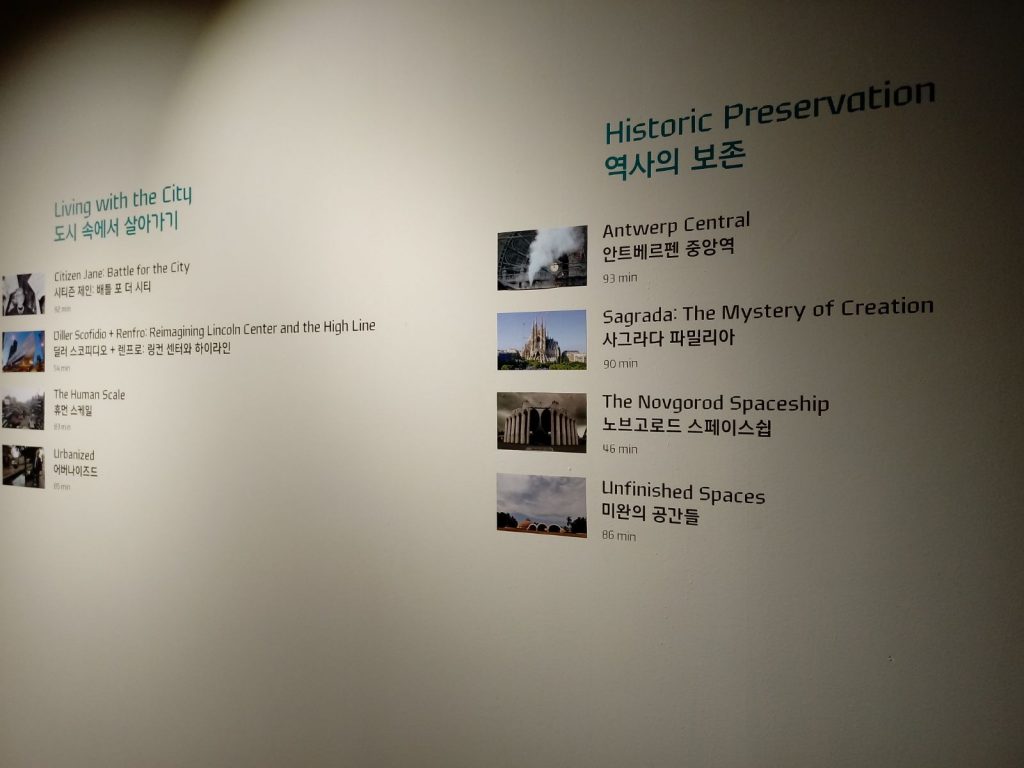 ADFF was approached by Storage Gallery, a space owned by Hyundai Card, to create an ongoing “gallery” of films. 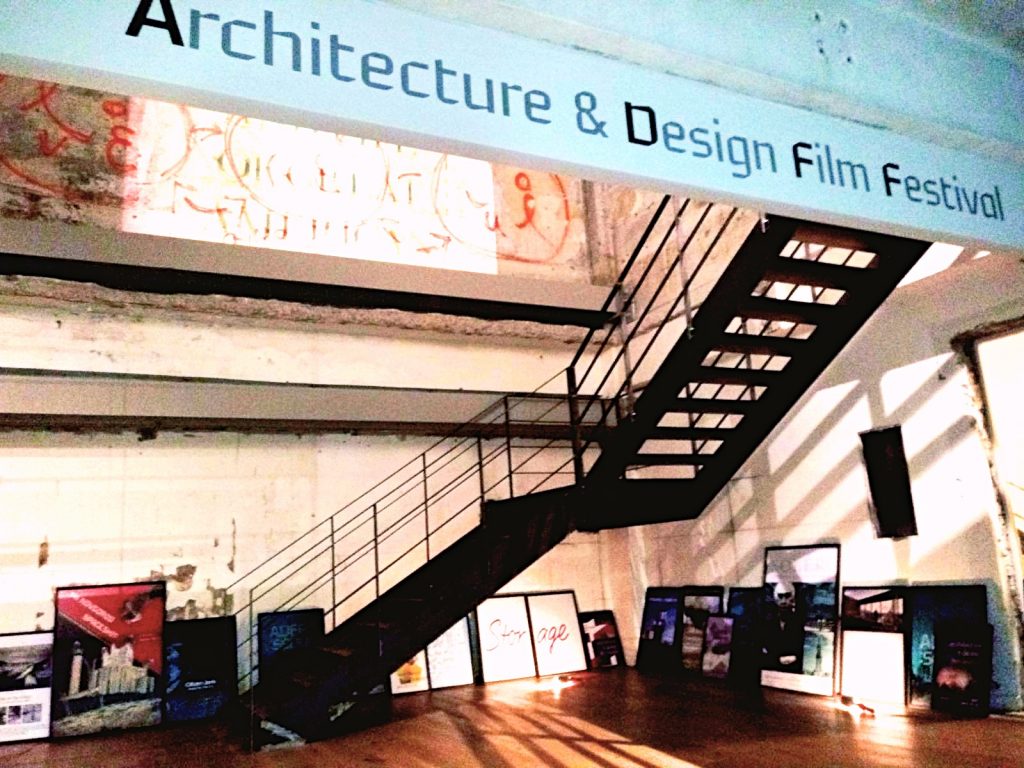 Seoul is rapidly growing – about 73% of all designers in Korea live in the capital.

The selected films were organized by themes rather than release dates, so visitors had the chance to revisit gems “from the archives,” explains Bergman. One of the themes that captivated Ito was the concept of space and society’s different definitions of it.

“Checking out the festival reminded me of how humans really need space to operate,” he notes. “Architecture and design are essential to providing humans space to interact in creative and meaningful ways. I feel that most spaces where adults can interact outside of the workplace are focused on consumption instead of creation. Designing spaces that encourage people to create by themselves and with others is a key part for deeper and more genuine connections as a human being.”

Ito offers an example, pointing out that, “children are great users of space, however limited, to imagine and create worlds of their own. A few colored pipes and platforms allow children to have more fun than most adults can have with the finest cushions and fixtures.”

“Coast Modern” was one of the films that left the strongest impression on Ito.

“For me, a lot of the appeal of the coastal modernism is how it relates to nature. Huge all-in-one buildings are too sanitized for me,” Ito says.

Indeed, in the film architect Ray Kappe explains that the symbiosis between architecture and nature means, “You’re so much closer to the reality of that the world is about.”

“’Coast Modern’ is beautifully shot, it’s a seductively beautiful film looking at the West Coast from LA up to Vancouver and saying, is there something different happening there with modernism?” Bergman explains. “It’s kind of a survey film – there’s a lot of history and also a lot of variety of different modernist-style Western influence.”

“The movie talked about how the adoption of modernism in office spaces by post-WW2 corporations hindered modernism from becoming more mainstream in homes because people wanted a refuge from their workplace and chose the quainter, developer homes instead,” he details. Ito says he “identified with living in spaces that limit the lines between ‘domestic’ and ‘natural,’” as seen in the homes featured in “Coast Modern.”

In the midcentury, modernism was reinterpreted on the West Coast – a trend that extended from homes to civic buildings, public landmarks, stadiums and so on. While modernist design aesthetics differed, there was a shared focus on how structures communicate with their surrounding environments from the serene private home of Ray and Charles Eames constructed of “simple” materials to the glass Wayfarer’s Chapel by Lloyd Wright (Frank’s son), which harmoniously blends into a forest.

The general public was initially “cautious” about embracing this design movement. In the film, however, The Urbanist editor Allison Arieff explains that with talk of the “democratization of design,” ultimately “people got really excited about it” as an opportunity to reconnect with surrounding natural beauty.

“Access to daylight and views, especially views of nature, has measurable positive effects on workers, students, and even patients,” says Nick Chiaro, general manager of Hunter Douglas Architectural’s window coverings division. “Research by Heschong Mahone and many others has demonstrated that having a view can improve a person’s emotional, mental and even physical health.”

While it can be easy to walk by examples of great architecture without taking notice, movies presented at ADFF like “Coast Modern” are meant to leave viewers educated, and hopefully inspired, to be more aware of how good design impacts daily experience. “…Everybody appreciates that sense that when you’re standing in something that is beautiful and well thought-out, your life is better for that moment,” Asaph Fipke says in the film.

“To me, the festival strengthened my belief in creating structures that encourage humans to interact in ways that are alternative to the norm of destruction and consumption so prevalent today,” says Ito, an origami artist. “I am creating structures resembling mushroom clouds out of origami cranes to juxtapose an image of destruction with a symbol of peace that came out of the atomic bombings of Hiroshima and Nagasaki. The pieces I’ve created are about 2.5-ft. wide by 3-ft. high. I have folded nearly 6,000 origami cranes and shape them together to send a message of peace in a world that hardly mentions peace as a possibility anymore.” 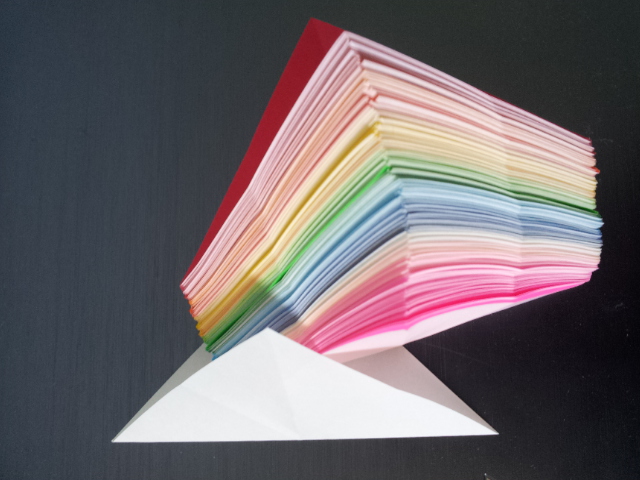 Daniel Ito is an American-born origami artist living in Seoul.

He explains his source of inspiration behind his structural art is the true story of Sadako Sasaki, a girl who developed leukemia from the fallout of the Hiroshima bombing. Ito hopes his message reaches the next generation of decision-makers who “carry the responsibility of choosing to perpetuate the problems presented by their predecessors or to pave a new path towards peace.”