How a Detroit Shoeshine’s Speakeasy, Where Aretha Franklin Once Performed, Inspired an Architect’s Push for Urban Regeneration

This is part five of a series of exclusive conversations with this year’s Architectural League Prize winners. Hunter Douglas Architectural is thrilled to support the legendary design competition.

“Many of our ideas come from this concept that, even in the most economically challenged scenarios, everyone deserves beauty,” says Anya Sirota, of Akoaki, the Detroit-based practice she founded with Jean Louis Farges. By digging deep into Detroit’s cultural history, she creates design structures, charged with rich public programming, which activate sites and promote urban regeneration. Akoaki’s projects take on different scales, forms and lifespans including an Afrofunk-inspired mobile DJ booth, an urban farm that’s being transformed into a multidisciplinary platform, an open-air opera set that “samples” from famous existing and disappeared stages throughout the city, and a hybrid boutique meets event space with shoeshine and cobbler services to boot. These urban intervention design projects ultimately celebrate Detroit’s lesser told stories that are a history of its people, urban conditions and significant music history. By creating interactive experiences, Sirota says, “we’re not fixing scenarios that are economically challenged, but we are saying that everyone deserves architecture and everyone deserves aesthetic experience.”

Sirota is one of six winners of 2018’s prestigious Architectural League Prize for Young Architects and Designers, which prompted applicants to consider the theme of the “Objective” and create an installation for an exhibit at Parsons School of Design. “This year’s theme seemed very close in sensibility to the kind of work that we do. We look to make objects that have objectives and attempt to make an impact on the urban scale.” This ethos was showcased in the exhibit via a series of clever, colorful vignettes featuring architectural models of Akoaki’s projects.

“Social practice has traditionally, in our field, been divorced from aesthetic practice.” —Anya Sirota 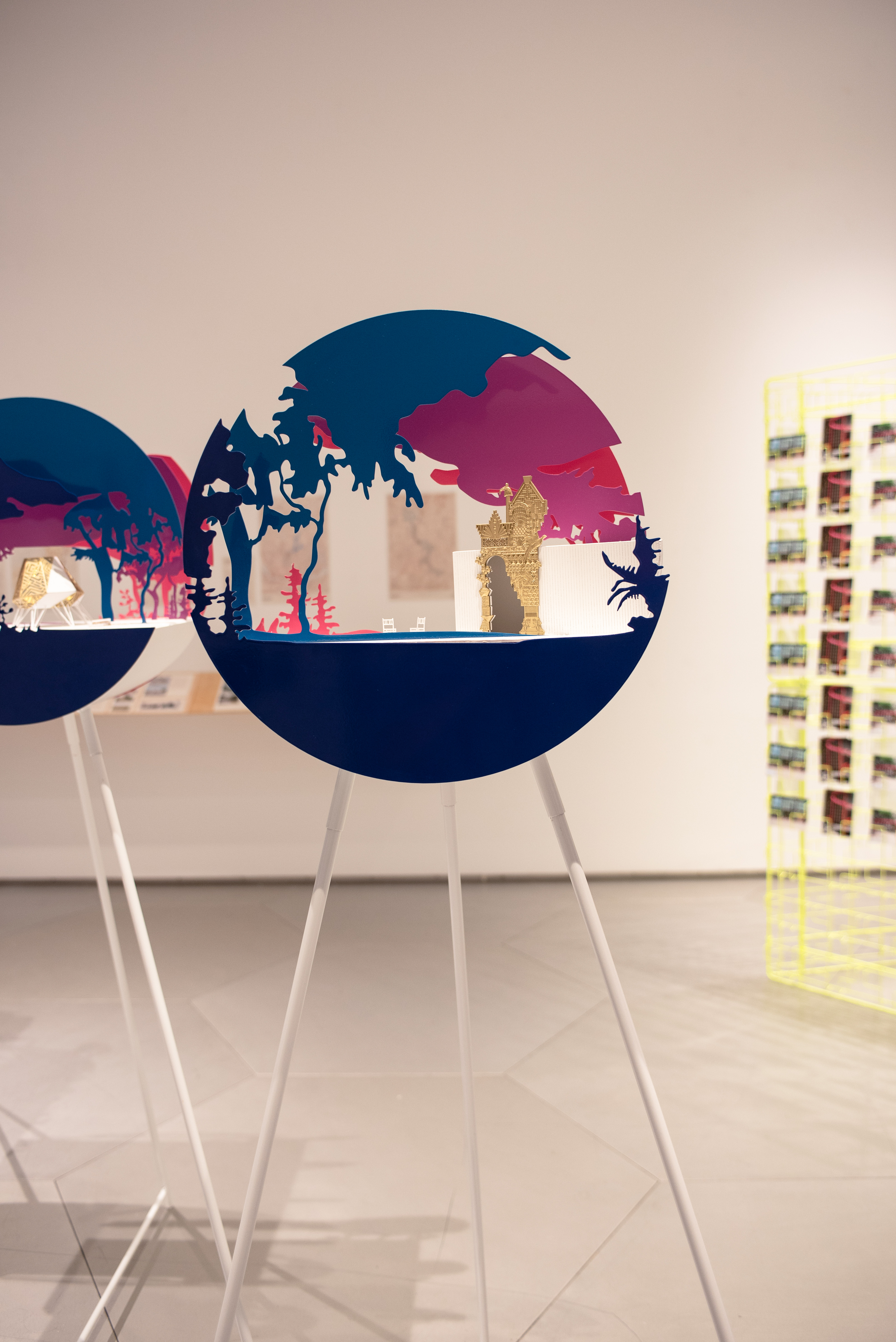 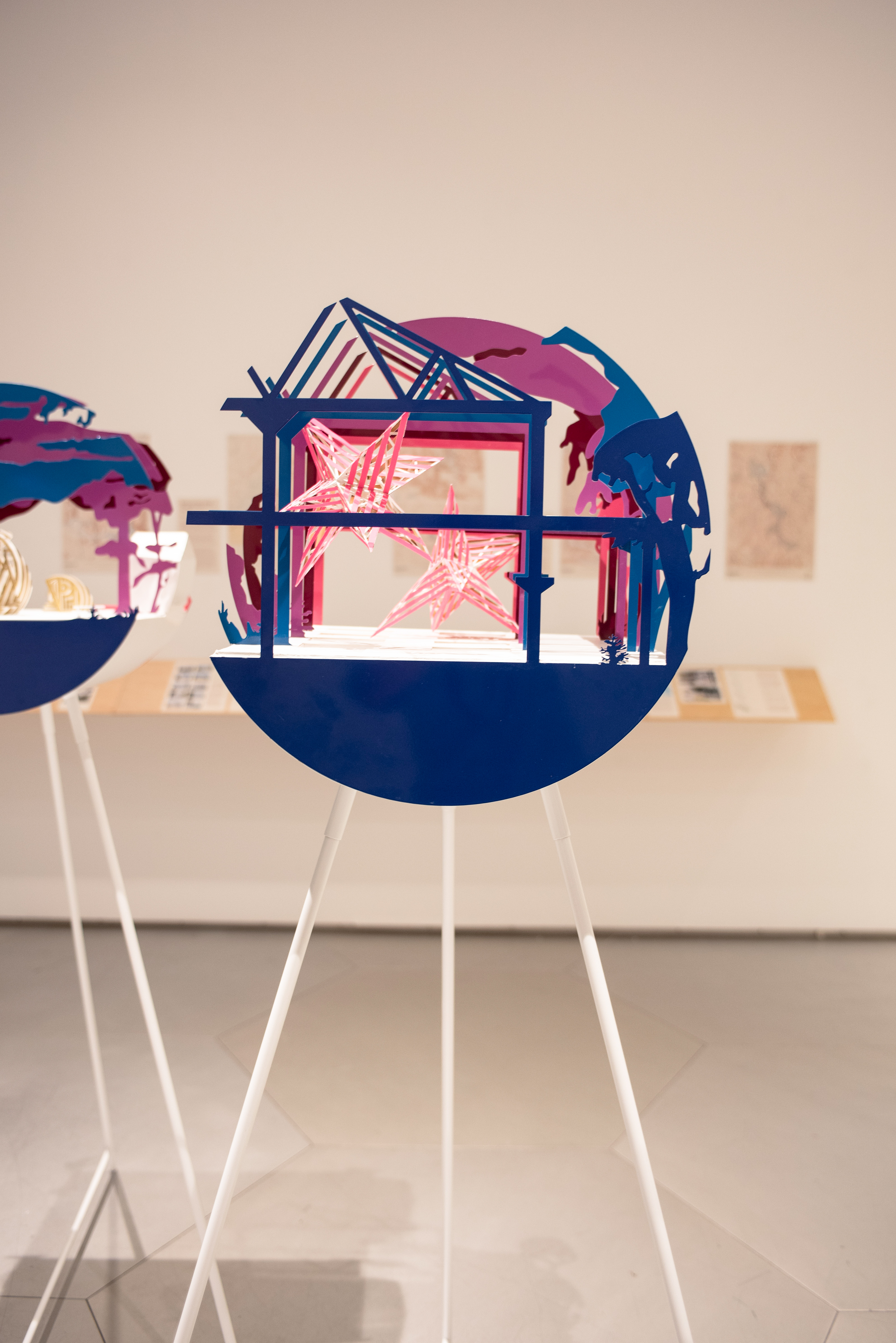 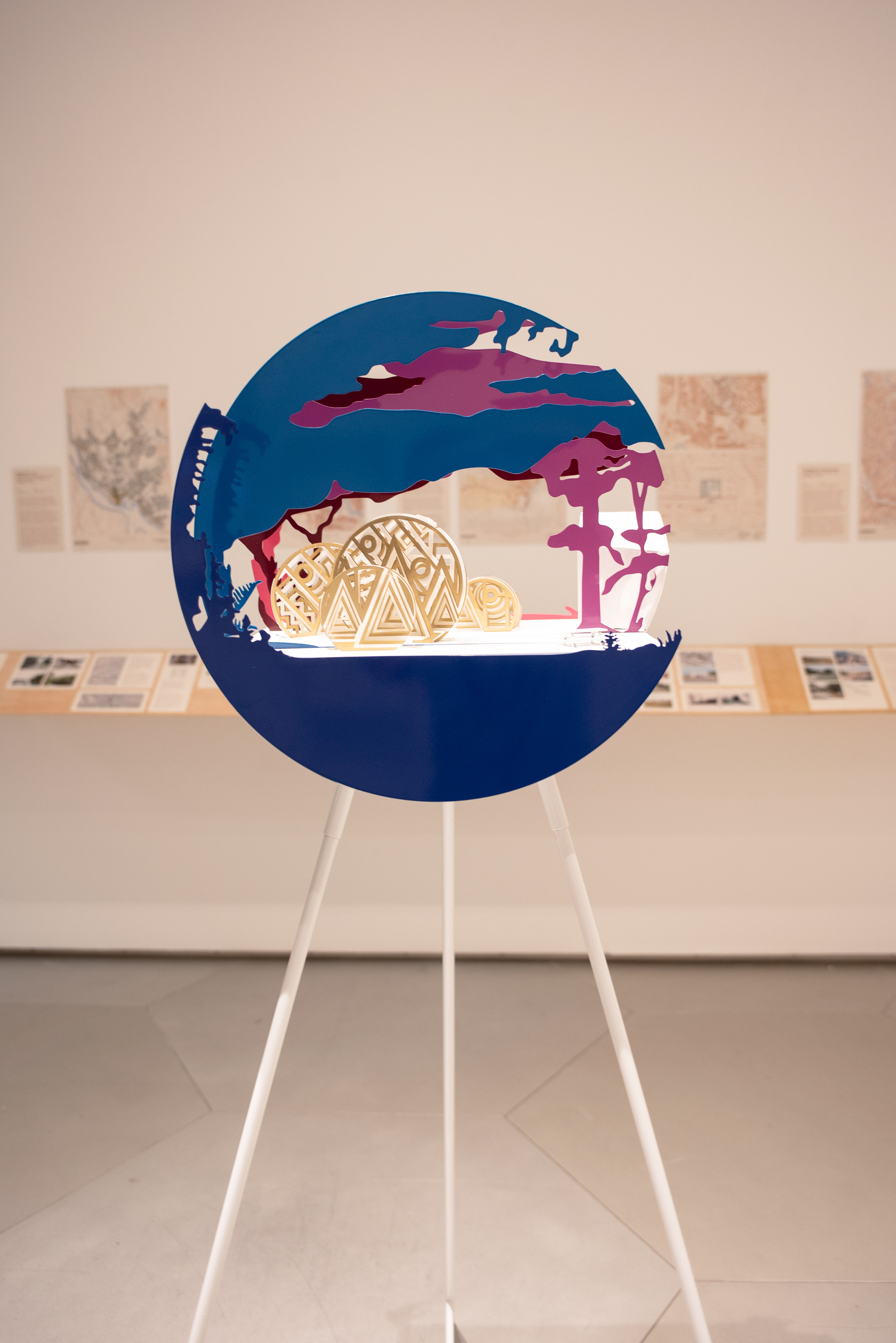 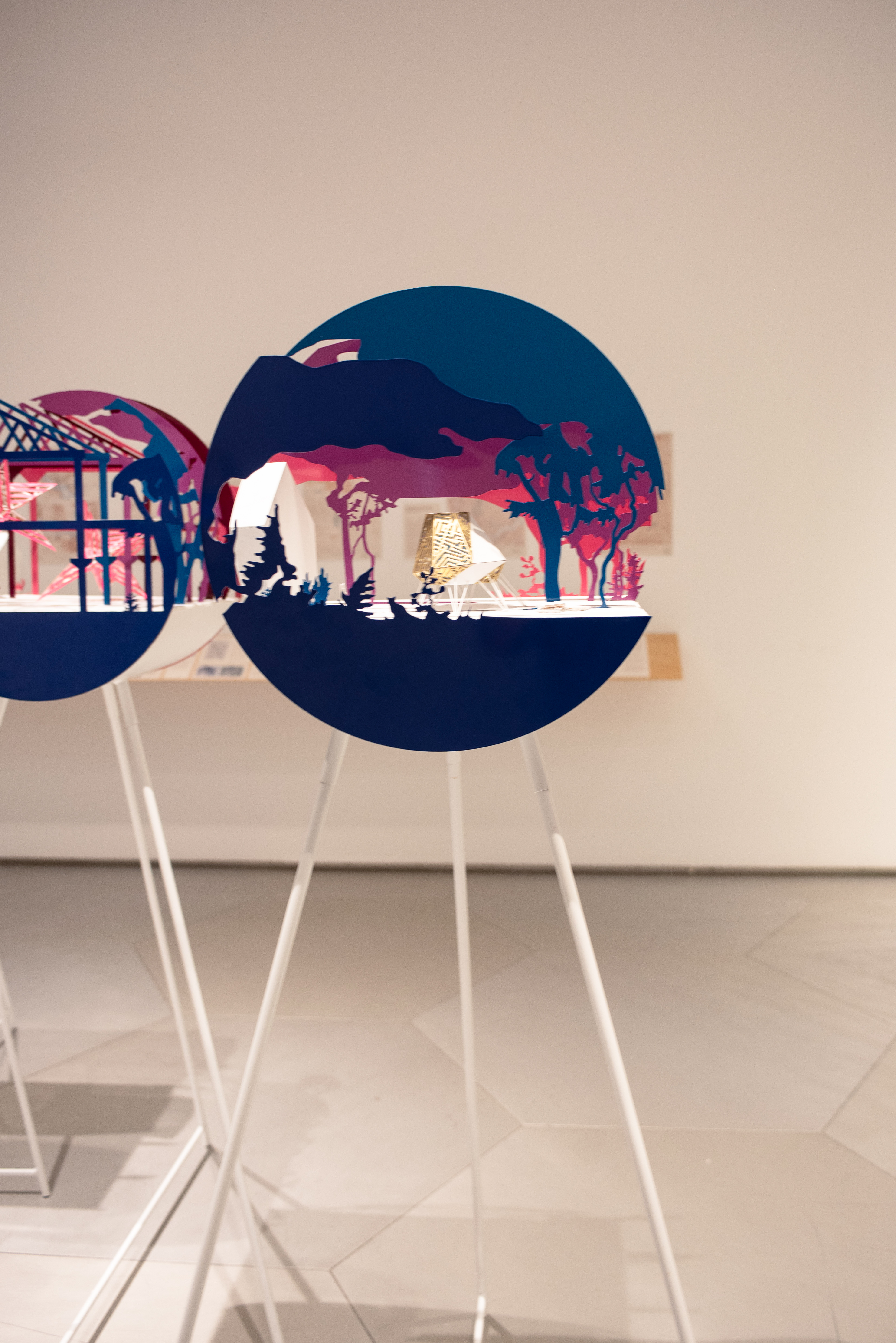 While the practice has also created installations in France, Brooklyn, Los Angeles and beyond, there’s a deep focus on investigating Detroit’s cultural history, creating new shared spaces and programs for locals to explore, and securing the external resources to make this agenda thrive. It is perhaps surprising to learn than neither of the partners hails from Motor City.

“One of the challenges in working in economically difficult urban scenarios is there’s always the dichotomy between insiders and outsiders, locals and folks that come in to work in those conditions. We’re flatly honest about the fact that we’re from the outside, but we also think that’s positive in terms of bringing our own experiences,” Sirota explains.

Farges is from France, a place where Sirota says the emphasis on investing in civic infrastructure, arts and architecture is much greater than in Detroit, which no longer has an official arts council. Sirota, meanwhile, is a refugee from the Soviet Union.

“So, we have a completely different set of issues we’ve tackled in my family and in our understanding of urbanism, identity and space-making,” she explains. “I think it’s impossible not to bring those experience to the foreground of anything we’re working on, but then we’re also sensitive to the idiosyncrasies of place.” During her League Prize lecture, Sirota took the audience on a virtual journey of Akoaki’s sensory-oriented projects and explained how interactions, tips and local legends inspire the discovery process that informs their designs. She told the story of the P-Funk inspired mobile DJ booth, the Mothership. It’s a distinctly angular, Afrofuturistic-influenced hub designed to pay homage to Detroit’s local funk scene. The designers settled on its exact hue of shiny gold by comparing every color of gold vinyl popularly used to “pimp out” cars in Detroit (they even consulted members of Parliament Funkadelic). As the George Clinton-worthy, out-of-this-world attraction travels to underutilized areas, it activates these spaces and acts as a culture magnet, drawing in artists who want to perform in the Mothership and the neighbors who just want to experience it (and take a cool selfie).

“There’s always the dichotomy between insiders and outsiders… but we also think that’s positive in terms of bringing our own experiences.” —Anya Sirota Sirota also shared the backstory behind a current project, Red’s Jazz shoeshine in the North End. Farges and Sirota were working on an ongoing effort to transform the Oakland Avenue Urban Farm into an equitable “experimental prototype” for diverse agriculture production, ecological stewardship, cultural activity and business development. During this process, they acquired a vacant building that was once a storied shoeshine business.

“We called the Detroit Sound Conservancy – they’re kind of sound preservationist music curators and we consider them archeologists in the city,” Sirota notes. “They did a research project about what could possibly have happened on that site and discovered that it was an incredibly important African-American venue and that it had a speakeasy in the back. All of these amazing musicians had played there – Aretha Franklin had mentioned it in her book about her life and the community. It was really the place where people hung out, where men, mostly, got their shoes shined, where they shared gossip, and then, they went in the back.”

In the speakeasy in the back of the shoeshine, customers would be treated to regular performances by the Temptations, Smokey Robinson and the Queen of Soul herself, icons that define such a significant era in music history and in Detroit’s history.

Akoaki realized the vacant building “was such a critical space” and undertook fundraising with the Urban Farm to bring back programming in the style of the events that the shoeshine once hosted. They’re working to reopen Red’s Jazz Shoeshine as a hybrid space which’ll offer shoeshine and cobbler services, boutique retail space and event spaces for performances and parties. In a full circle moment, the business will be run by one of the original owner’s family members. This project, Sirota says, “is an illustration of how culturally-sensitive, locally-bound heritage can be an instigator for broader regeneration in the community.”

Akoaki installed two stars, each spanning over 30 feet, in a defunct tannery with all elements produced and assembled on-site. Pop It Up, Amilly, France, 2013. Credit: Akoaki

Akoaki’s method of investigating local cultural identities and history, responding through reflective design, and fundraising and collaborating to create impactful programming is what Sirota calls, “a slow-cooked process.”

“We’ve worked in the North End where it’s very difficult to tell what happened there. Where are the key cultural sites? Where did important things happen in music history, in the birth of funk and the cultural vanguard of Detroit? To tell those stories, we do things that are very different from typical community engagement exercises. We set up spaces,” Sirota explains. She offers an example – for a year, she and Farges ran an art space that invited community members “to do their own installations, to have meetings, to have parties, to use this space with us. And from those interactions, we form a broad network of friendships… we start to understand what’s important for people, what they know about space, and what characterizes its value.” She adds that she has a profound appreciation for those native Detroiters who have “held down” the infrastructures, communities and local interests when the city has faced “so many major challenges” for such a long time.

“It takes years to figure out what really is happening, what’s happened there in the past, and what [is] the projected future. But, we do it by creating spaces that are adaptable, that invite residents to participate in their own programming, [and] that create very audacious pop events in unlikely scenarios that are joyous and inclusive.”

“To tell those stories, we do things that are very different from typical community engagement exercises. We set up spaces.”

Winning the League Prize and being recognized at an institutional level was an “incredibly affirming” experience for Sirota, who came to New York to share these Detroit stories and spaces with new audiences. This green light also came at a time when the practice is gearing up towards creating more permanent projects, which Sirota describes as “truly architectural in scale.” Akoaki is currently working on a 9,000-square-foot store that will be transformed into a community kitchen, greenhouse, residence space, and art installation platform. 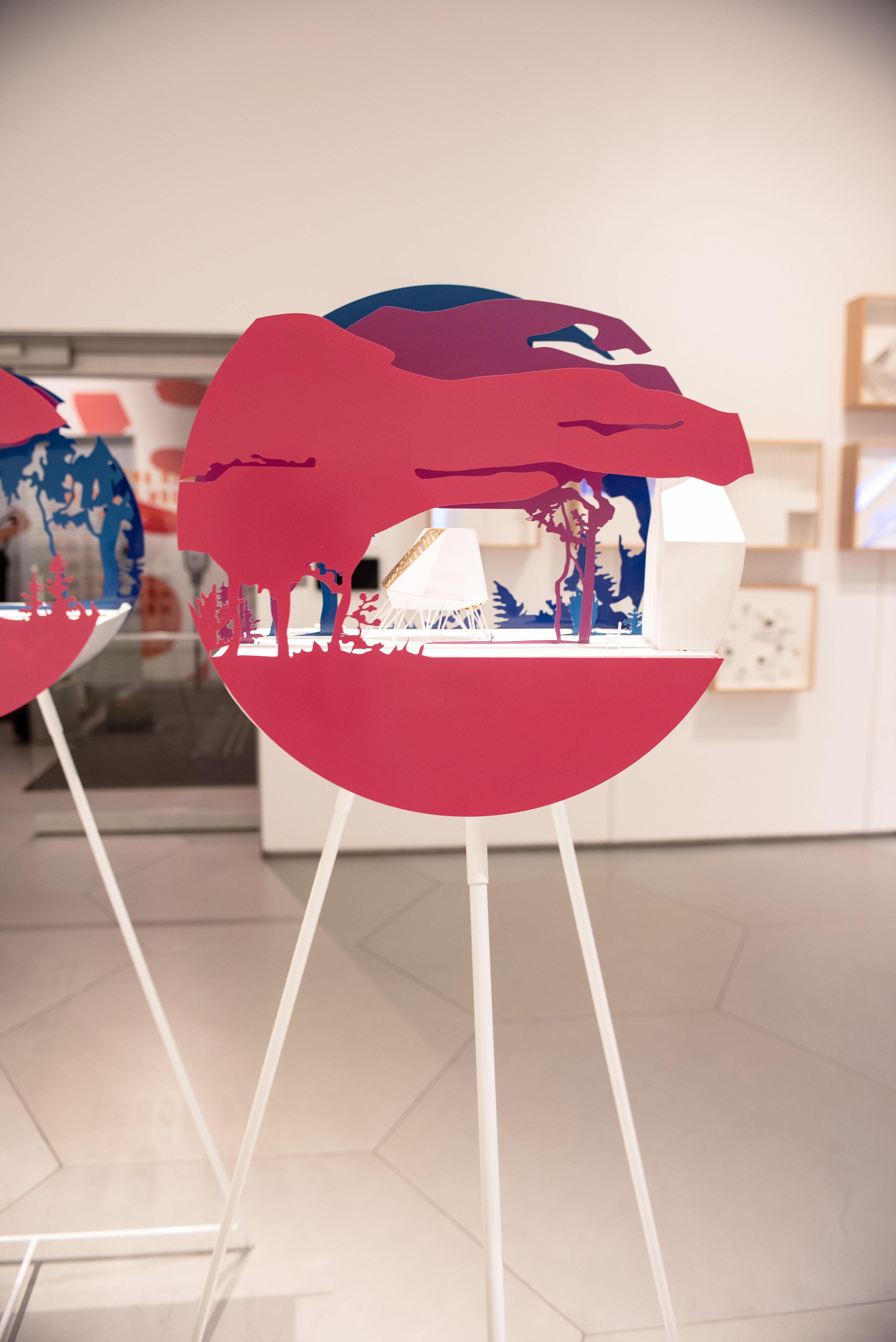 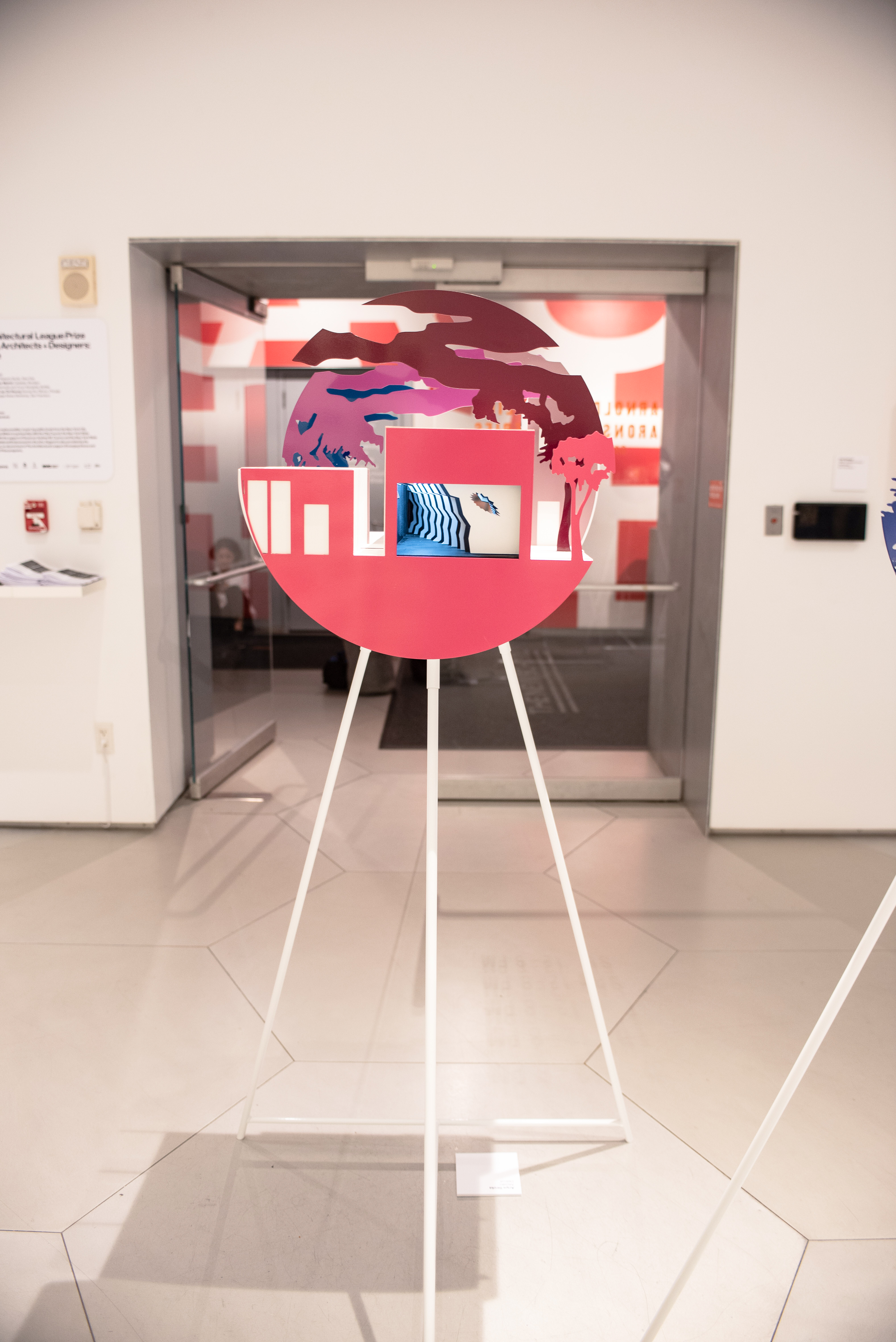 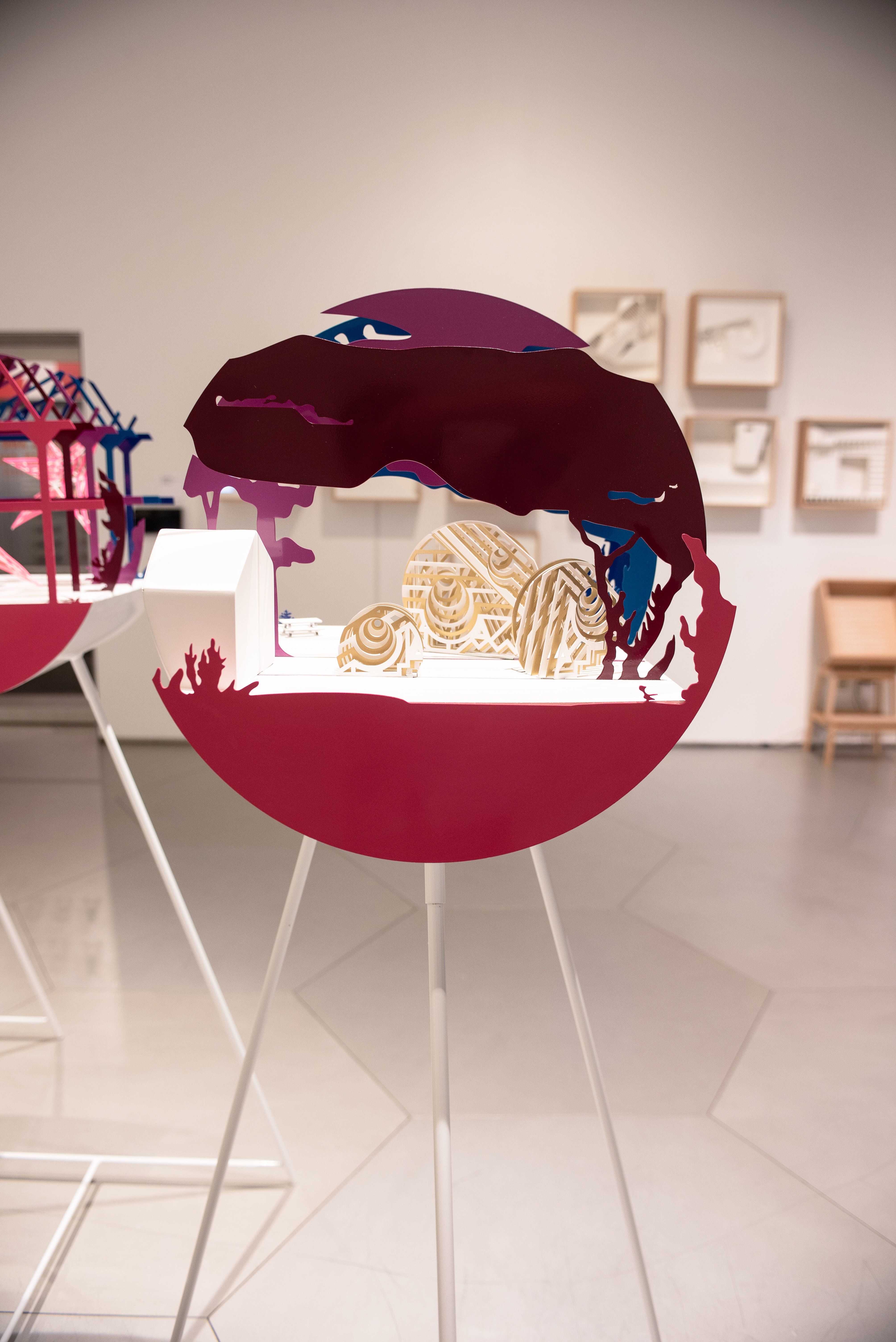 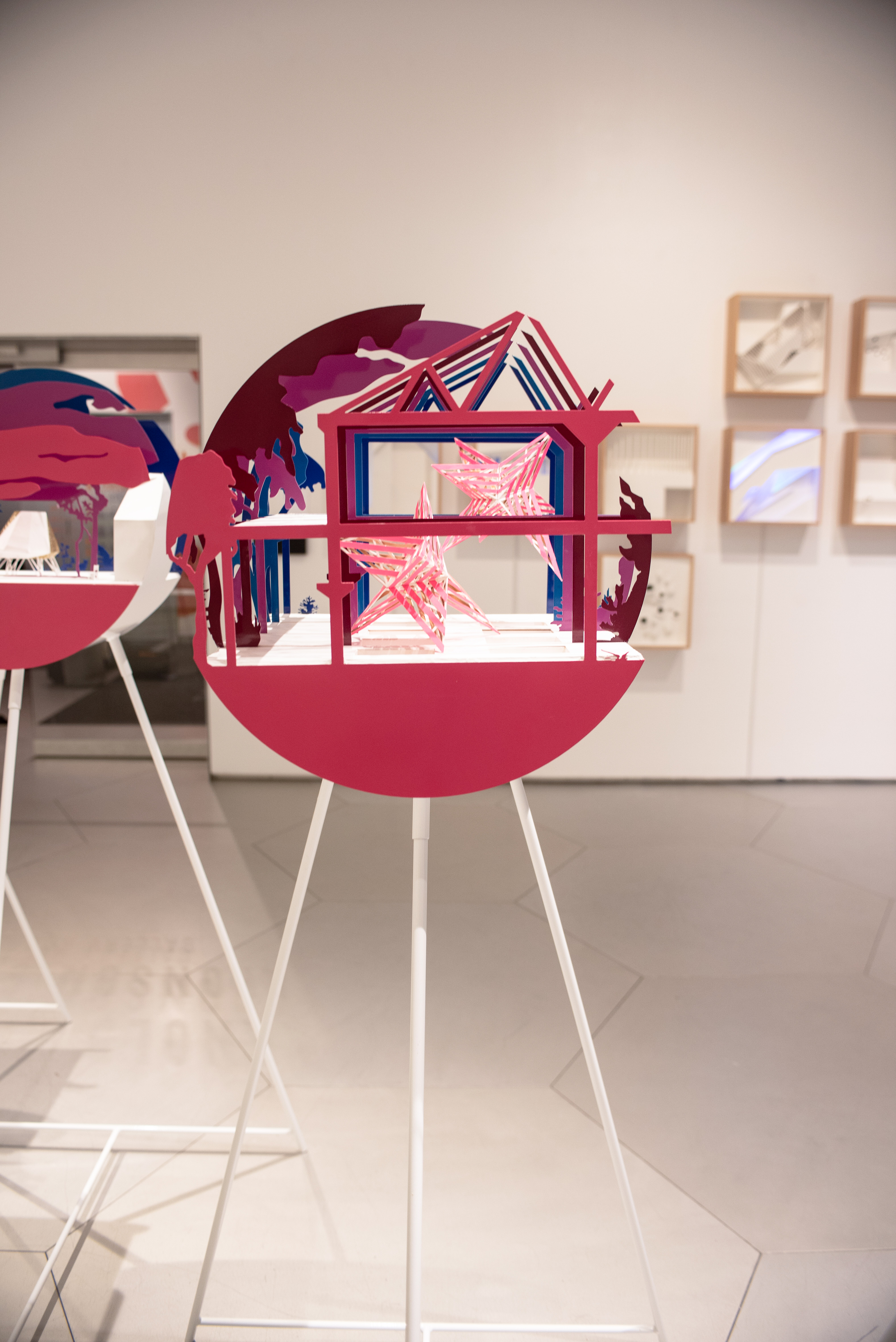 “To get to a place in our practice where the content and the context and the container of what we do is appreciated, is incredibly vitalizing and empowering,” she says. “Social practice has traditionally, in our field, been divorced from aesthetic practice. Sometimes it’s difficult to foreground interests in beauty, in aesthetics, in urban possibility, when the matter that you’re dealing with is so complicated” and can also come with a high price tag. Sirota hopes the types of design projects and community engagement Akoaki is focused on are the “ingredients” that can help “catalyze possibilities” like reinstating an arts council. She says ambitions of this nature “might seem far-fetched, but once they’re in place, they’re kind of urban prototypes for future investment and future cultural infrastructures.” The Architectural League Prize winners exhibit at Parsons School of Design. Hunter Douglas Architectural is a proud sponsor of the annual design competition.