Colors and patterns change spatial perceptions and inspire reactions. Applied to the ceiling, graphics have the power to better balance the atmosphere of a room.

As designers look up towards the ceiling as an underutilized plane for introducing inspiring, personalized décor in a room, they must strive for balance. The so-called “fifth wall” offers the chance to play with pattern and color that references design elements throughout a room, as well as the opportunity to surprise and intrigue guests with an unexpected, attention-grabbing touch. However, adding color and surface design to the ceiling requires some special consideration. Experts agree that patterns and palettes directly impact the senses, shifting perceptions of space with the colors and prints featured in the interior design. For example, “It is well known that stripes on surfaces can change the perspective experience,” says Ko Kuperus, senior product development director of Hunter Douglas Architectural’s walls and ceilings division.

Typically, ceilings represent a plain white field housing functional subsystems like lighting and ventilation in commercial environments. Bringing color and graphics to this part of the interior elevates the impact of design. Kuperus offers the following tips:

These insights into ceiling design inspired Kuperus and his team at Hunter Douglas Architectural to develop new ceiling designs, the Techstyle® Graphic collection. The collection features customizable acoustical ceiling panels in an array of patterns from subtle to bold and from natural to abstract.

Color experts also face similar considerations. “One of the big questions that we get is about using color on the ceiling. How do you go about it and what are things to think about?” says Andrea Magno, a color and design expert at Benjamin Moore. She finds a little can go a long way when it comes to incorporating bold patterns and colors, and you have to ensure the architecture of the space suits it. It’s something people are thinking about as a design solution, she says, to make public spaces like stores, restaurants and offices more personable.

“The ceiling is going to become another design element pulling everything together. It definitely makes a difference,” says Magno. “If you’re setting a particular mood everywhere else but then you look up and it’s just a plain white ceiling, sometimes you don’t notice it at all, or sometimes it can detract from the whole thing.”

Magno believes “what (Hunter Douglas Architectural) is doing by giving designers more options to be able to bring in all of these different textures and patterns is going to help them have more options to have everything be more cohesive.” The Techstyle® Graphic collection, created with collaborators HOK and Guillaume Martin of the French design firm, iwoodlove, offers a rich assortment of patterns in an approachable palette featuring colors like latte, seaglass, coal, concrete and copper penny. 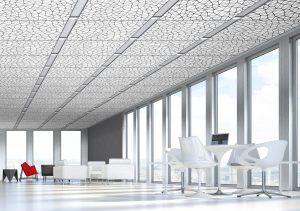 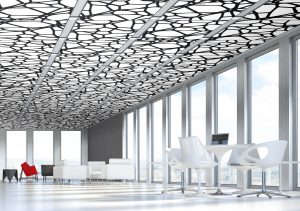 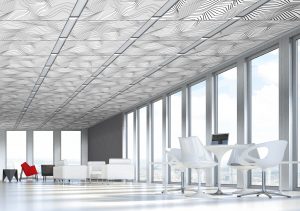 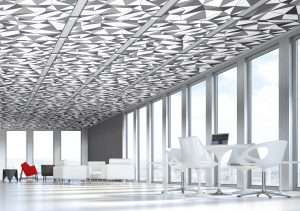 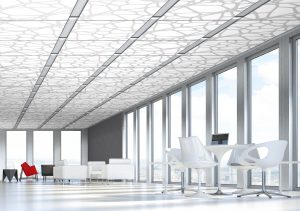 From the collection’s bright and inspiring seaglass color to its more organic and calming neutrals, the influence of color changes how we perceive a space both psychologically and physiologically, and can cause under or over-stimulated reactions. It is, after all, a universal language, albeit a complicated one (cultural factors also shape how it’s experienced). For instance, pastel yellow generally conveys “sunny, friendly soft. The message in the interior space is stimulating, brightness, coziness,” an Archinect piece by Frank H. Mahnke finds. He writes that the designer needs to keep the public’s visual interpretation and reaction of color in mind.

“The impression of a color and the message it conveys is of utmost importance in creating the psychological mood or ambiance that supports the function of a space. A classroom has a different function than a hospital patient room; an office space is not a production line, etc.” explains Mahnke.

“If you’re using a real sharp black-and-white graphic pattern then that’s going to really set the stage for a space that’s maybe more energizing,” says Magno, “whereas if you had something that’s a bit more organic and free-flowing, then that’s going to be more calming.”

Techsyle® Graphic #ceilings can be rescaled & recolored to fit any room #design.

In his article, Mahnke dismisses the “assumption that color is no more than decoration and color specifications can be satisfied or solved by personal interpretations or the following of color trends and design idioms in current fashion” as “absolutely false and counterproductive.” He elaborates, “Humane design places the human being in the center of its concern and purpose,” and insists designers must consider perception when creating inspiring environments.

Whether you are sprucing up the ceiling of an office or a store, a hospital or an airport, Kuperus explains that the same theory applies. “Dark and warm colors generally make a space feel smaller and/or more intimate” while “light and cool colors make a space feel larger.” He adds that “spaces with ceilings that are lighter than walls feel higher” and when “the ceiling is darker than the walls, the space feels lower.”

The Eye Has to Travel (Up): These #ceiling panels bring #pattern to the #5thwall. Find one that fits your space: https://t.co/AsEyaRWJWL pic.twitter.com/zK8BXIuaoM

The trick is “tying the color and pattern together so that they’re working and complementing each other,” says Magno. “…Pattern can do a lot to take the mood that’s started by the color and push it even further.”

As Magno puts it, from the floor to the ceiling, “With every layer, you want everything to kind of talk to each other so that when you take a step back, it all just comes together so perfectly.”