With the 2018 Design Pavilion theme, “From This Day Forward,” much of the interactive NYCxDESIGN activity taking over Times Square centered on design solutions for a better, more sustainable future. While digital behaviors like ordering take-out via app can ease daily dinner prepping, the amount of waste produced hurts the urban environment and those who live there. Americans consume a tremendous amount of take-out food: according to Statista, 20% of those surveyed in 2016 ordered delivery food at least once a week – a number that’s climbing, and that is likely higher in urban concentrations. That creates an amazing amount of waste: “About 40 billion plastic utensils are used in the United States every year,” declared a sign at the student exhibit. Due to littering and improper disposal, many of these items wind up polluting waterways around cities, impacting aquatic life. The collaborators behind the “Future of Take-Out” propose that, “A sharing economy of reusable carryout containers could eliminate the need for plastic take-out containers.”

As part of NYCxDESIGN, students from Pratt’s Graduate Communications Design / Package Design and Industrial Design Departments consulted experts in NYC’s Department of Environmental Conservation. Through this partnership, young designers focused on improving packaging design, repurposing take-out containers, and increasingly switching over to recyclable materials like aluminum and natural plastic alternatives like mycelium and algae. The exhibit strives to disrupt the norm by offering creative solutions to mass plastic consumption, which leads to the contamination of the New York Harbor via waterways fed by the city’s storm drains. The free exhibit brings awareness to architects and designers exploring the Design Pavilion’s installations, multimedia presentations and talks, as well as to everyday Times Square pedestrians, intrigued by a structure made up of naturally-derived tubes with models of food trays and utensils, along with educational infographics. 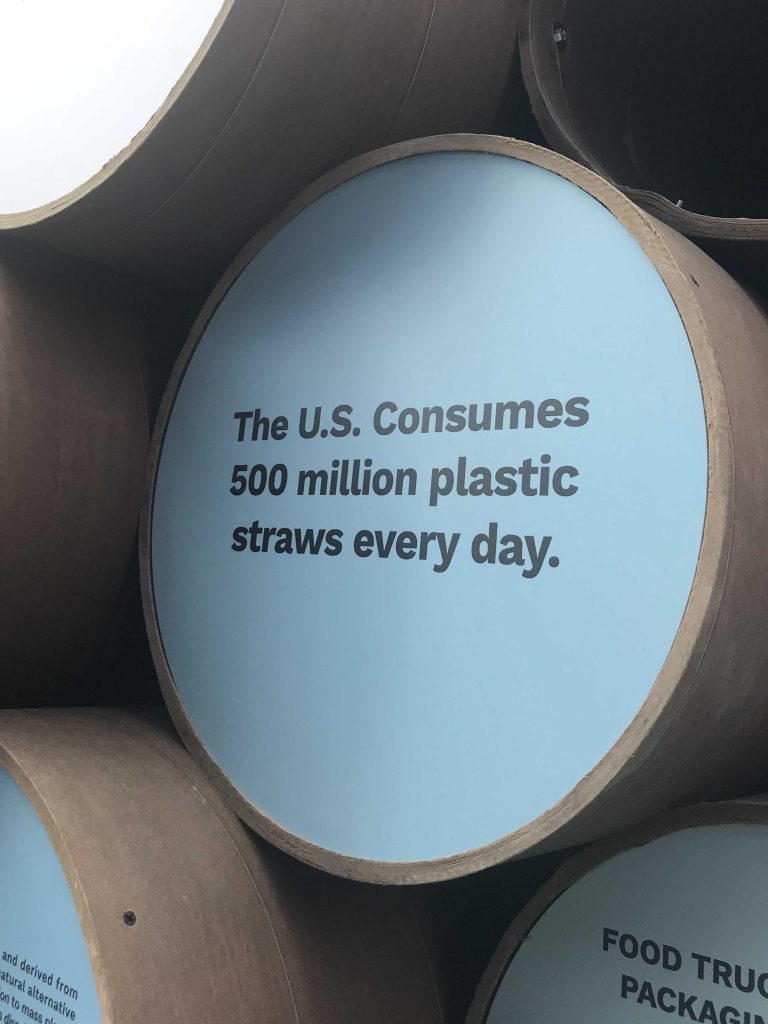 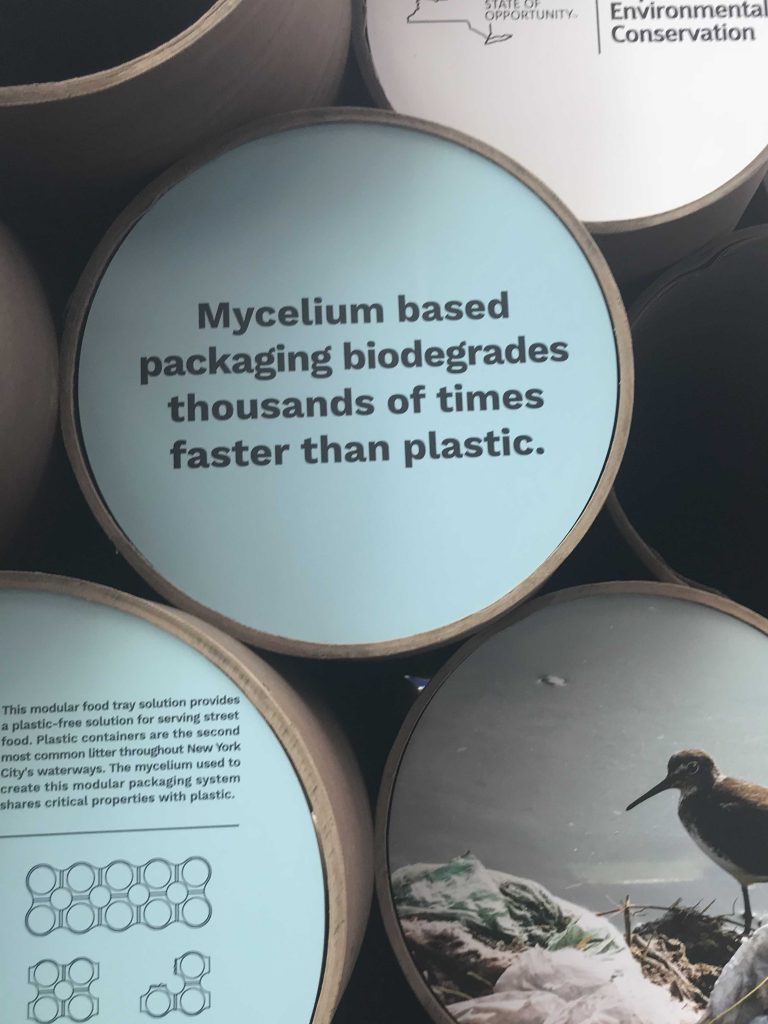 “The biggest design flaw of plastic takeout packaging is its inability to biodegrade over time,” the students collectively stated in a graphic display. By contrast, “Aluminum is the perfect takeout food container. It can be recycled repeatedly with no loss of its key properties,” announced a project led by Francesca Suman, Shanshan Chen, Xiangrong Qi, and Josh Bird. “This project creates a modular aluminum package as an alternative to plastic. It can adapt to a wide array of food types and forms all the while never entering the waste stream.”

Unlike materials such as cardboard and paper, containers made of sustainable aluminum, which is lauded for its strength-to-weight ratio and design flexibility, can be recycled regardless of coming in contact with grease (imagine how much the idea could revolutionize an average pizza box design). In this case, the package design is anchored by thicker, reinforced aluminum, around which other container components are organized. Aluminum is truly 100% recyclable and retains its properties “indefinitely,” the exhibit points out.

In fact, almost 75% of all aluminum ever produced is still in use today. That recyclable quality is a principal well known to manufacturers of building products and other items. For example, metal ceilings may contain up to 92% recycled aluminum, according to Ron Rice, general manager of Hunter Douglas Architectural Ceilings & Walls. He adds that in North America, “Aluminum recycling is such a mature industry with facilities in every city; when aluminum leaves job sites, we know it gets recycled. We don’t have to handle end-of-life: that doesn’t exist for aluminum.” If the same approach were applied to food delivery packaging design, essentially the food tray you’re using to eat tacos could have been a can of beans in a former life. Looking ahead, expanding this process to other industries could cut their energy consumption drastically, as recycling aluminum uses up to 95% less energy than producing primary metal, according to the DEC.

The exhibit’s tubes also displayed photos of the impact of waste on the environment alongside facts such as “mycelium based packaging biodegrades thousands of times faster than plastics.” The display literally stopped passersby in their tracks and offered an imperative lesson in sustainability. One group of students proposed a “modular food tray solution” to bring a plastic-free way for food trucks to serve grub on the street in a sustainable way. Right now, “plastic containers are the second most common litter throughout New York City’s waterways,” their research found. 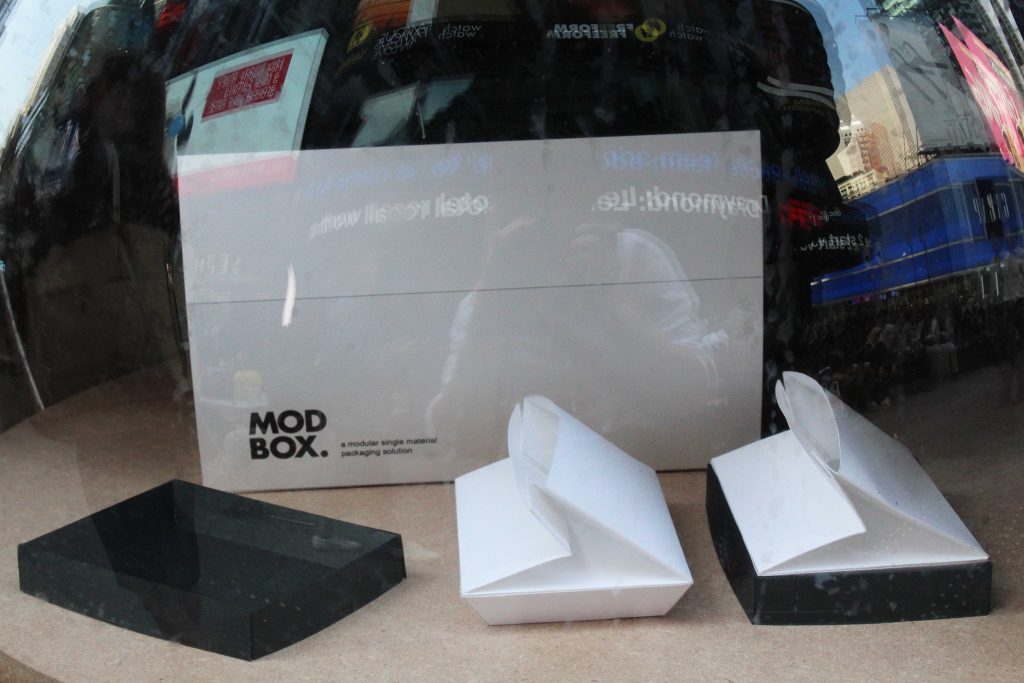 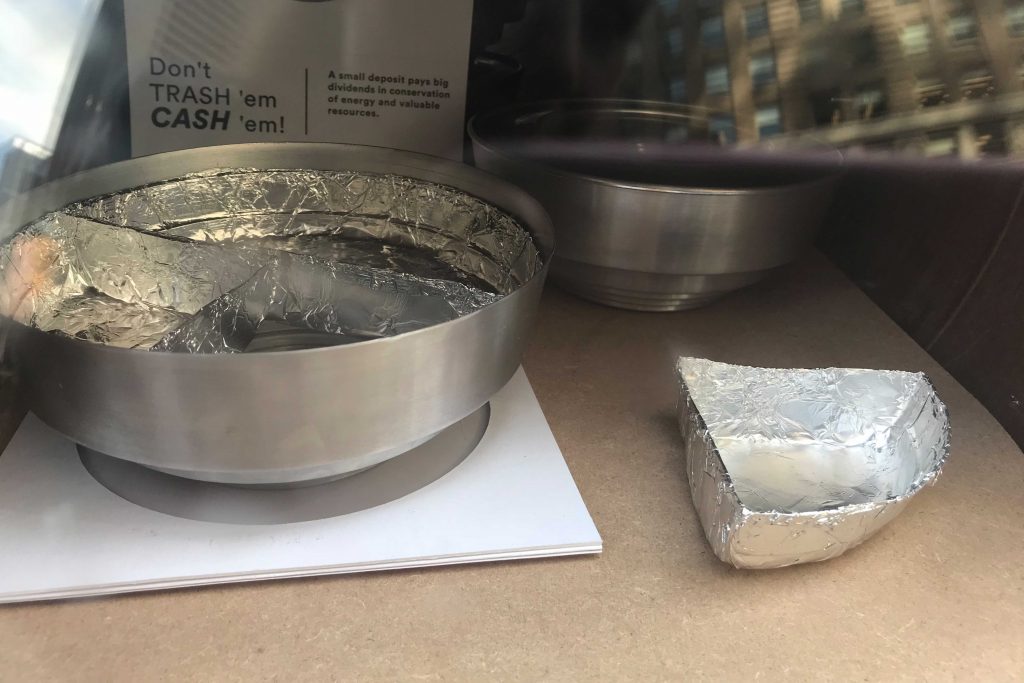 Instead, Pratt students opted to improve plastic packaging in both form and use with compostable and naturally-derived materials. They proposed modular container designs with bio-material options like the mushroom-based foam, mycelium, which, unlike Styrofoam, can be broken down. Other interesting substitutions include a mix of hemp protein, orange peels and processed crab shells to create “a strong structural base to replace more upscale black polystyrene, or what we might recognize as sushi containers.” In this case, fiber from the kenaf plant creates dividing inserts that are topped off with a transparent, gelatin-derived clear bioplastic lid. The entire bio-material-based sushi container could literally be composted with any leftover food. To give you a sense of scope behind a potential packaging redesign with this model, it’s worth noting that behind pizza, Asian food takes the second spot for consumer spending in the food delivery market.

Americans use a whopping 500 million plastic straws every single day, creating a major source of waste that’s polluting waterways. Pratt students envisioned marine-friendly packaging made of plastic alternatives to help alleviate the strain on the environment. Bashayer Alarfaj, Garrett Benisch and Alice Hixon Kirk, searched for an alternative to plastic straws that’s durable enough to withstand hot and cold temperatures, but is also 100% compostable. The group proposed switching to algae-based straws with a redesigned profile to include a rounded hole surrounded by six others, forming a chamber of extra interior walls, allowing it to be strong enough to puncture lids and swirl ice. Furthermore, the students suggested, “the recipe for creating the algae straw offers the possibility of integrating different flavoring and coloring by using food-safe ingredients.” Once you’re done with the straw, you can get rid of it guilt-free – the material decomposes naturally “in a matter of weeks.” According to the exhibit, agar sourced from seaweed is quickly becoming a popular alternative used in cosmetics, liquid pills and candy too. Prachi Sanghvi and Angela Allers looked at eliminating the need for plastic utensils that are stuffed into bags of take-out food by creating an integrated design. The designers offered a manufactured paperboard food tray with utensils already incorporated, which could arrive at restaurants scored, trimmed and ready for delivery. The tray would rely on folding techniques instead of using any adhesives, making the end result easier to recycle. The attached utensil would be removed at a point of perforation and, in a DIY approach, would be assembled through a folding pattern. According to the Pratt exhibit, “The tray with utensils can be stored flat which reduces transportation costs and impacts… The final material for this package will be heavy paperboard, which is durable enough that the tray and utensils can be used for a short period of time.” 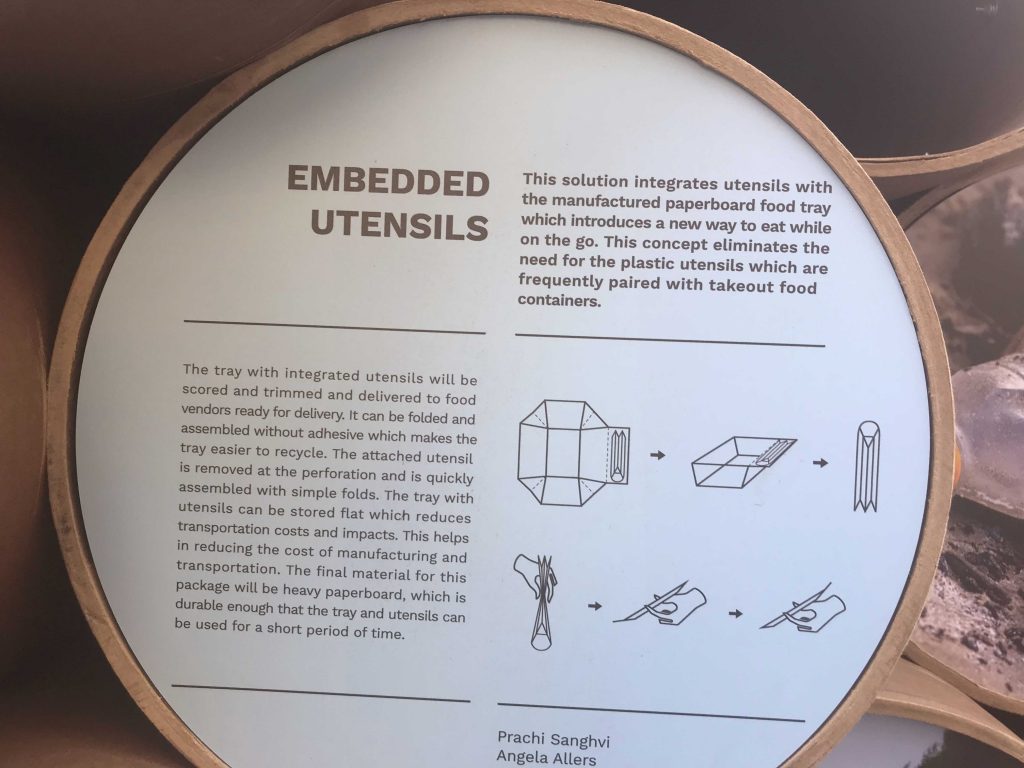 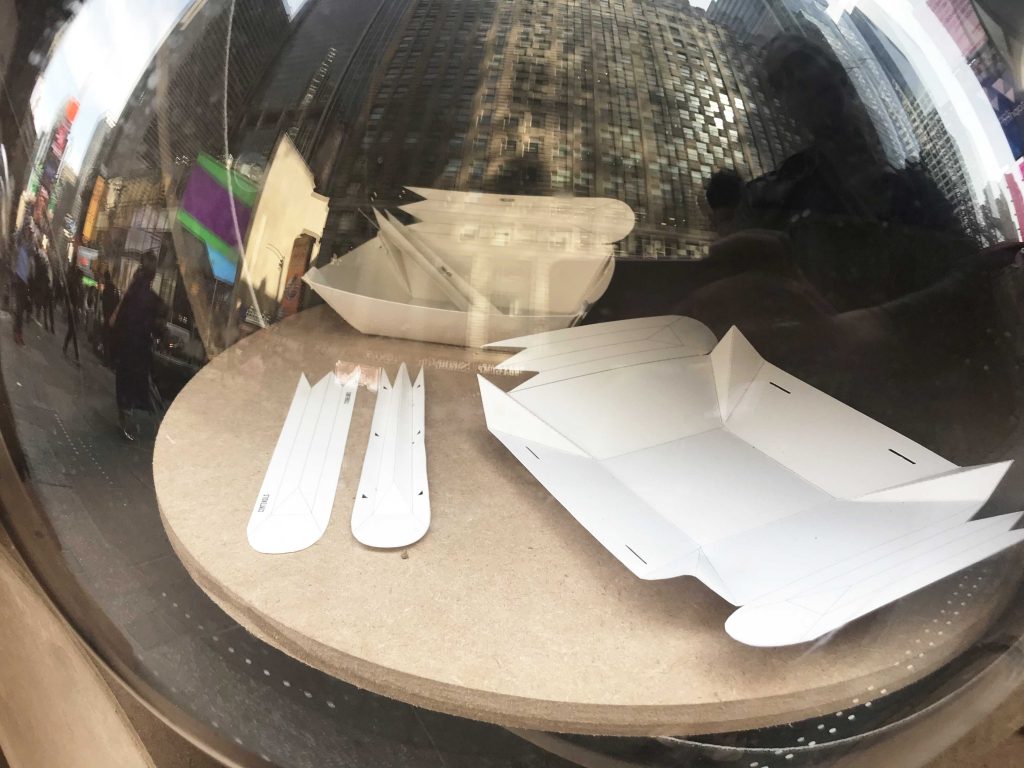 “Design Pavilion showcases the transformative impact of design on our daily lives in forward-thinking and accessible ways,” said llene Shaw, producer and founder of Design Pavilion in a statement. Beyond showcasing fascinating bio-materials in creative new forms, some Pratt students considered tapping into – and incentivizing – the culture around food delivery apps today.

“The current reliance on food ordering apps offers an opportunity to encourage sustainable behavior.” One group, Diana Tsoy, Yiyun Tao and Yanqiu Bi, focused on using popular mobile food app habits to incentivize change. Their vision is an app which rewards virtual currency to those who make sustainable choices when it comes to ordering take-out food. The virtual rewards would then be able to be used towards future purchases, gifts or donations. By tackling an issue from a design and cultural behavior standpoint, Pratt students, with the guidance of the DEC, presented compelling models for change in the bustling Design Pavilion, where an estimated three million visitors engaged with the installations and ideas on display.