The Ceilings & Interior Systems Construction Association celebrated the industry with its Excellence awards this week in Orlando, Florida. The annual event recognizes noteworthy projects and players, and this year Hunter Douglas Architectural garnered three major wins for projects in Detroit, Houston and Uniondale, New York. Two of those wins were the result of collaborations with architectural specialty products manufacturer Gordon, Inc.

In addition, Ron Rice, Hunter Douglas Architectural Ceilings general manager, was honored with the President’s Award by CISCA President, Paul Gallagher. The honor recognizes Rice’s contributions to the success of the president and to the advancement of the association overall.

“I am honored to have received the CISCA President’s Award,” says Rice, who adds that the event was an opportune moment to celebrate the “passion for our industry and the contributions put forth by our teams.” 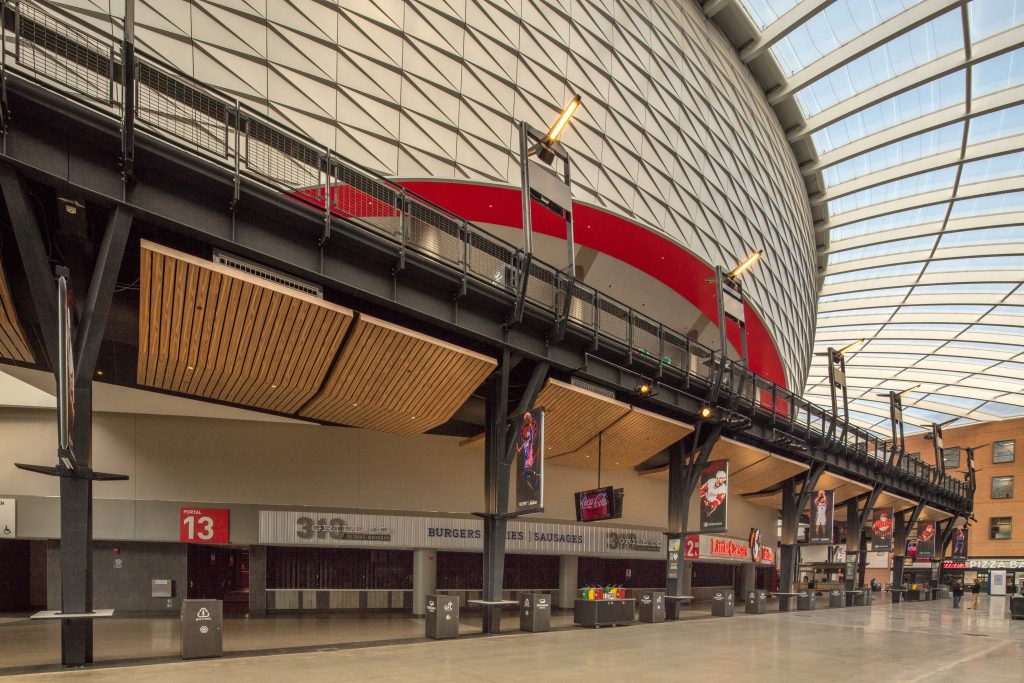 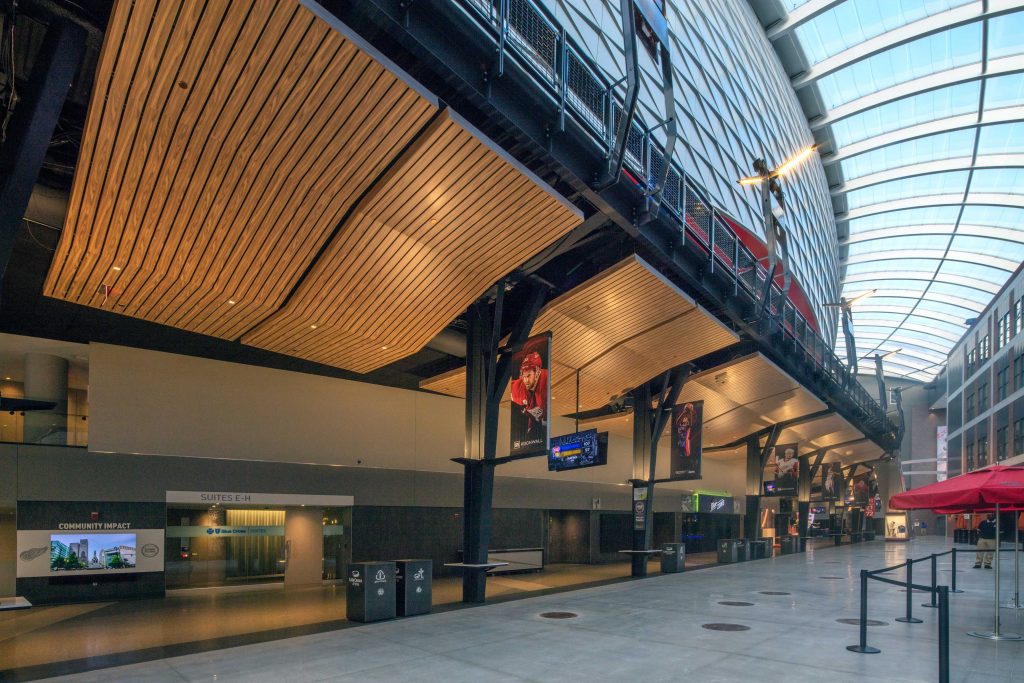 Detroit’s $862.9 million dollar Little Caesars Arena, home of the Pistons and Red Wings teams, earned best project in the under 50,000-sq.-ft. civic category in the central region. The award is a recognition of the collaborative teamwork between Hunter Douglas Architectural and Gordon, Inc., who installed red “gondolas” of semi-private box seating created by suspending a massive steel frame from the arena’s roof offering a sort of bird’s eye view of games below. Meanwhile Hunter Douglas provided 3,151 individual pieces of aluminum, factory-produced Box 6 ceilings finished with a wood look, which helped warm the arena. Altogether, these Box 6 ceiling elements spanned more than 20,000 linear feet along the concourse and concession areas. To create a roadmap for easy installation, Hunter Douglas custom-engineered these with ultra-precision so that when the panels arrived on-site, there was no need for the contractor to field-cut or measure, speeding up the process on the job site. The internal Hunter Douglas team worked with HOK architects; a joint venture by contractors at Pontiac Ceiling & Partitions and Turner Brooks; installation contractors from A.C. Dellovade; independent manufacturers representatives Midwest Noise Control; and Gordon, Inc. Located in the heart of downtown Detroit, Little Caesars Arena will anchor bustling activity in a new 50-block mixed-use district in the area, and signals the ongoing economic revitalization of the city.

“Anytime you get to create something that is definitely a showpiece or catches somebody’s eye, it’s extremely rewarding,” says Hunter Pope, Hunter Douglas’ architectural sales manager, continuing, “just to be able to work with a high-profile architect and client to create something that really stands out and is really different than they’ve ever seen before, that’s really the best part.” 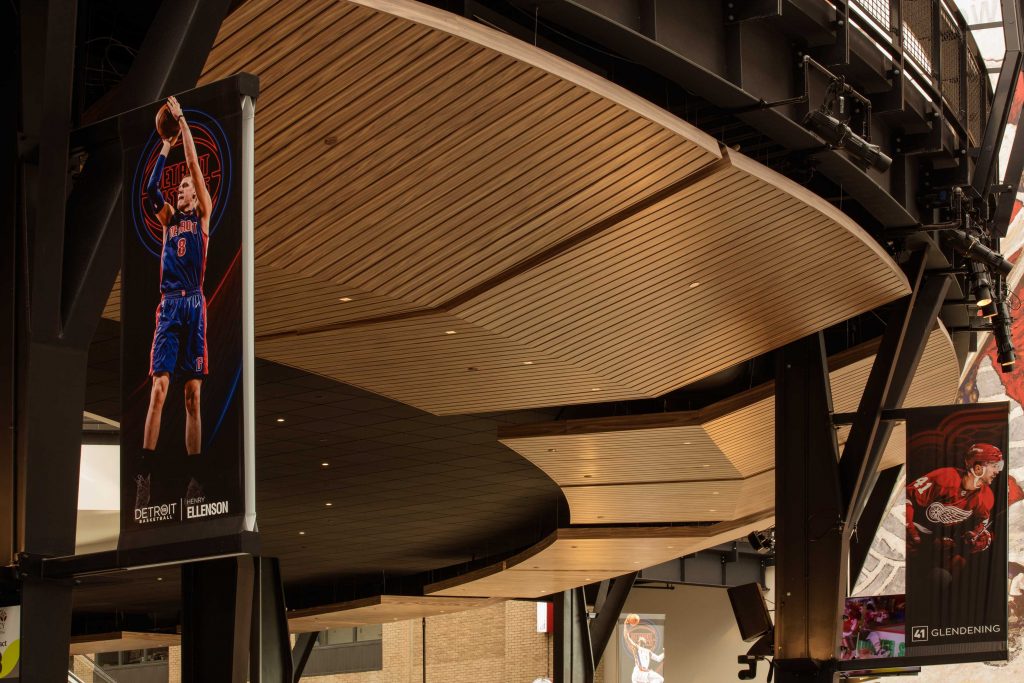 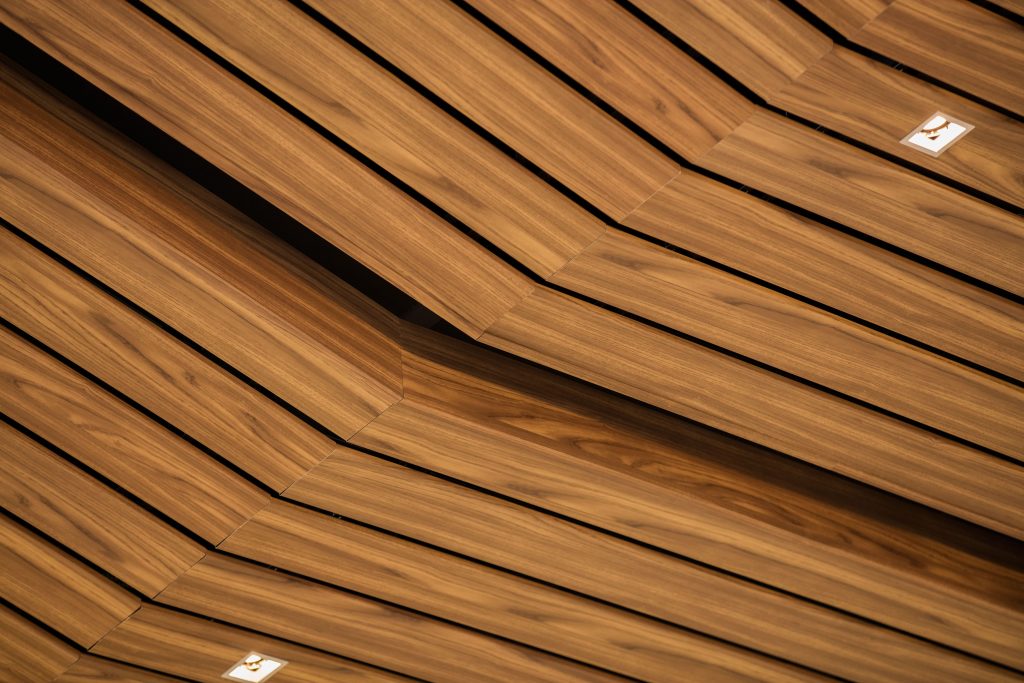 Hunter Douglas’ customized ceiling elements are also featured prominently at Nassau Veterans Memorial Coliseum, in Uniondale, New York, near Manhattan. This sporting and events arena won top honors in the under 50,000-sq.-ft. civic category in the east region. Architects Gensler took on the challenge of not only upgrading the design aesthetic and incorporating new technology, but also creating a solution that would alleviate crowding without increasing the existing building’s footprint. Their solution made a direct connection from the concourse to the venue’s bowl, upgraded retail storefronts, and brought abundant daylight into a curved concourse that now feels airy and open. Overhead, Hunter Douglas’ team custom-engineered High Profile Series Frameworks and Straight Baffle ceiling panels to create a rafter suspended ceiling. Made up of peaked metal beams with a decorated wood look finish, the carefully angled ceiling beams lead the public through the concourse into the arena’s bowl. The engineering team worked carefully to vary lengths and angles and establish a “wave effect” that allows visitors to “see movement as they walk around the coliseum,” said Pope, who also contributed to the project’s design. 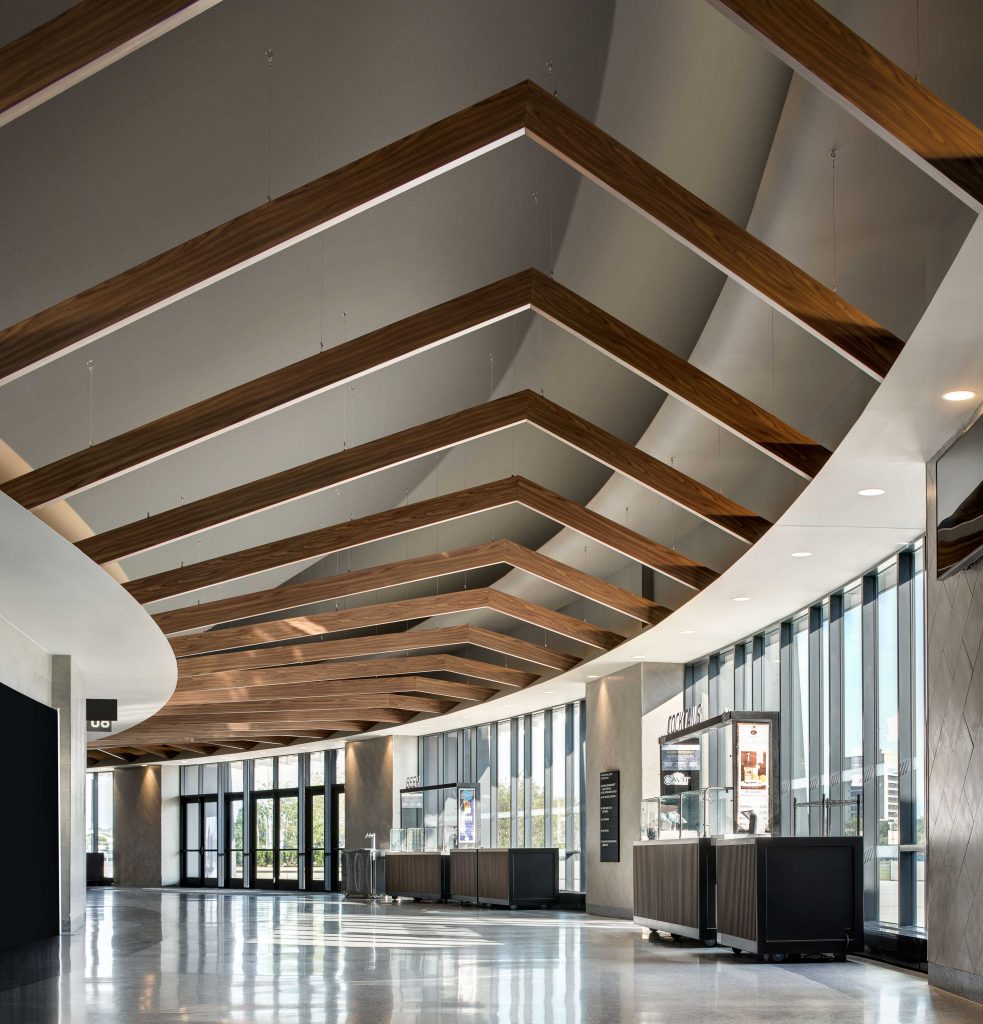 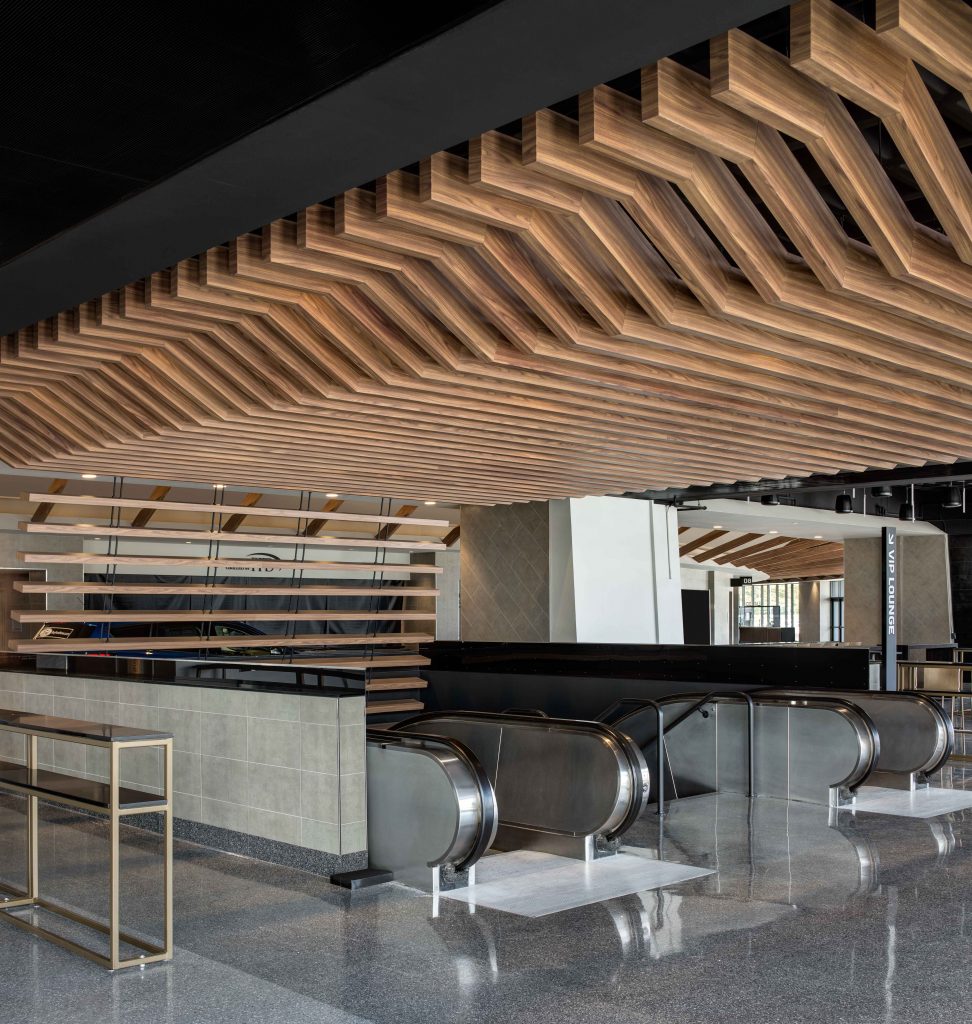 “I don’t think anyone’s really done that type of system before,” subcontractor Richard Meyer, of Cord Contracting, says, “there was definitely a lot of designing involved in this custom work.” 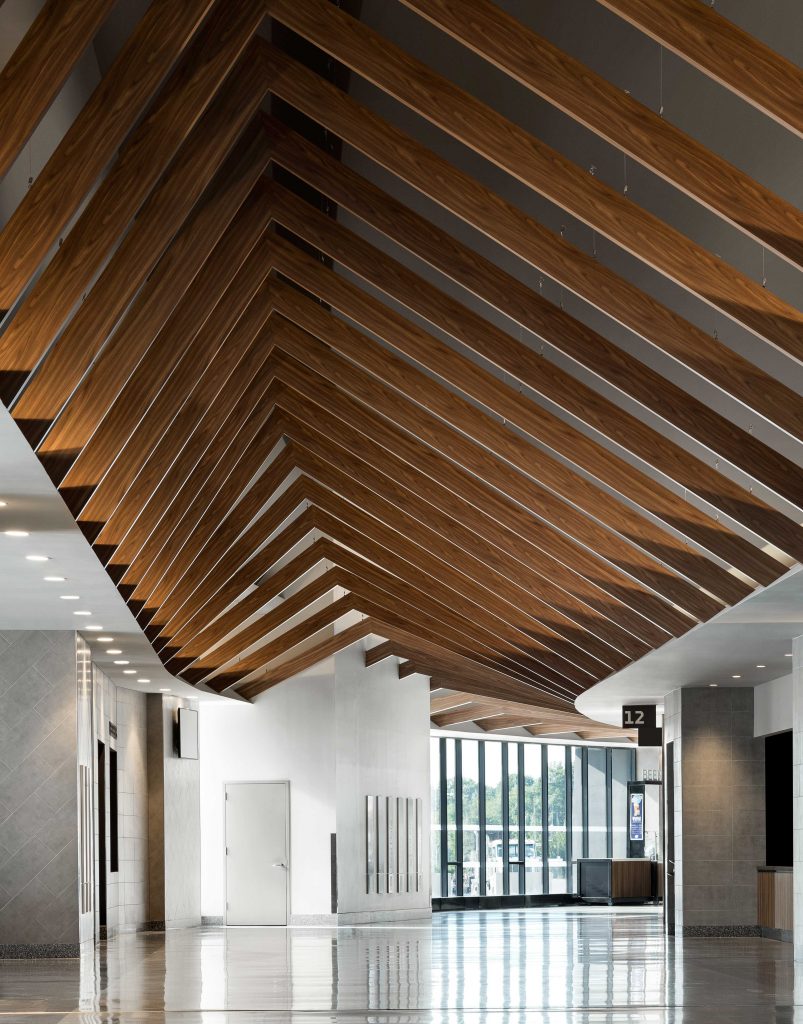 Terminal C North at George Bush Intercontinental Airport was completed in two phases: the first was the 264,000-sq.-ft. terminal while the second phase was an $85-million ramp.

Hunter Douglas Architectural is proud to have received such high recognition of excellence from CISCA on these projects and is grateful to all collaborators involved in executing the design and construction stages. 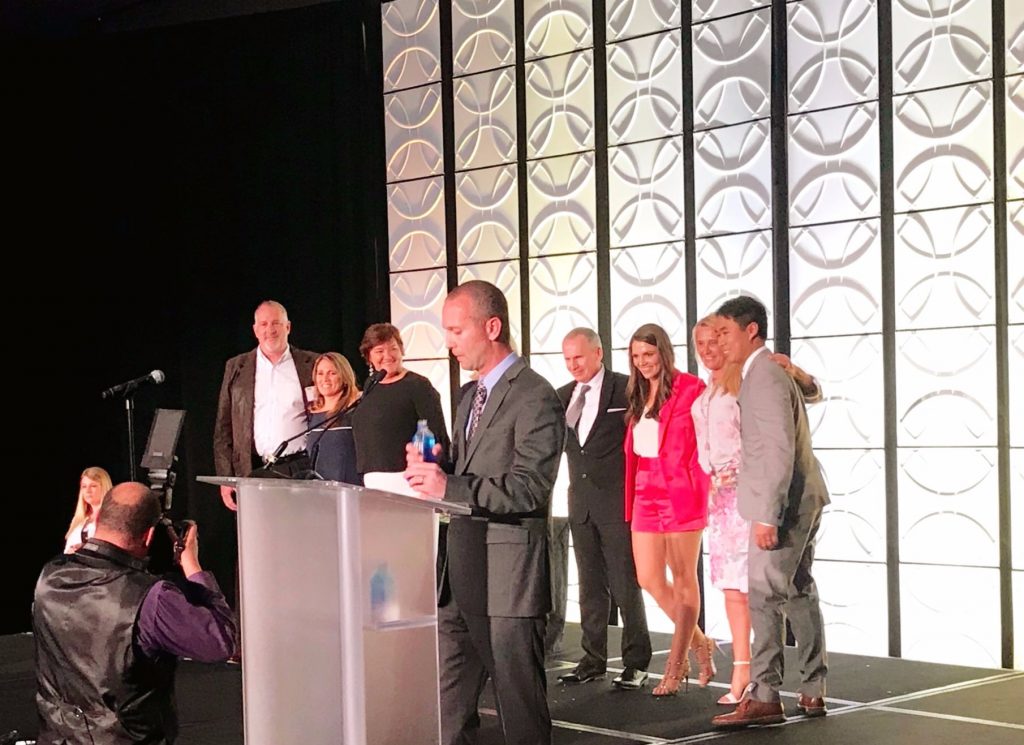