The boo business is big business in Salem, where visitors are drawn to haunted sites + architecture from 17th century colonials to 20th century libraries

A trip to spellbound Salem, Massachusetts takes on a witchy theme any time of the year, but around Halloween, spirits flock to the town that still rides on the reputation of its legendary 1692 witch trials. A quick 15-mile trip north to Salem from Boston takes you through a series of quaint coastal towns, like Marblehead, which Vogue calls, “New England’s best-kept seaside secret.” Marblehead is considered the birthplace of the American Navy, the training grounds of Shalane Flanagan, the first American woman in 40 years to win the NYC marathon, and the home of NBK Terracotta’s North American offices. Enjoy the view on the picturesque drive from Boston, through Marblehead to Salem, Massachusetts.

But for spooks and scares, you’ll want to keep truckin’ another 15 minutes to Salem. The town’s name is derived from the Hebrew word “Shalom,” and means “peace,” though it’s unclear if its former inhabitants, accused witches, are actually resting in peace. Salem’s unique mystery meets history lures over one million tourists each year.

Once in “Witch City,” arm yourself with a bit of history by making a trip to the Salem Witch Museum. Due to its popularity, the museum offers extended hours in October. Life-size stage sets and dramatic lighting bring life to the mystery surrounding the Witch Hunt. The story begins in January 1692 when the daughter and niece of Rev. Samuel Parris fall ill and the village doctor, William Griggs makes a visit. He diagnoses their illness as “bewitchment.” This comes at a time when there was a strong belief in the devil’s existence, village fanatics in Salem Village and their rivals in Salem Town were at odds, the area recently suffered from a small pox epidemic, and the threat of attacks from surrounded tribes created an air of tense suspicion. The museum sets the stage for this emotional context before delving into the horrifying cases of the Witch Trials’ victims. Arm yourself with history at the Salem Witch Museum, which sets the scene when Rev. Samuel Parris’ daughter and niece fall ill and are diagnosed with “bewitchment.”

Altogether, 19 accused men and women, who refused to admit to witchcraft, would be sentenced to hang, while one man was crushed to death and seven others died in jail. Over the course of time, the victims’ families received apologies. However, unlike other participants, one judge, John Hathorne, never expressed regret during his lifetime for convicting so-called witches (click here to read transcripts of his eerie court examinations). His relative, Scarlet Letter author Nathaniel Hawthorne, is said to have been so embarrassed by his relative’s harsh reputation and so feared a curse that left the family destitute, that he changed the spelling of his last name to distance himself. The museum also contrasts this dark period of American history with more modern “witch hunts” including the fifties’ McCarthy hearings. Roger Conant, Salem village’s founder, is often mistakenly associated with the Witch Trials because of this statue’s proximity to the Witch Museum.

Out front, strike a pose with a statue of Roger Conant, the village’s founder. Surrounded by 17th century buildings, many of which are painted black, the cloaked figure is often mistaken for having participated in the trials, which happened after his death. Stroll the Colonial Revival waterfront gardens in the setting that inspired Nathaniel Hawthorne’s famed 1851 novel “The House of Seven Gables.”

Stop by the House of Seven Gables, the picturesque setting of Nathaniel Hawthorne’s famed 1851 novel. The historic site offers unprecedented views of Salem Harbor, which are both romantic and mysterious. The seaside’s deep shade of blue contrasts that of the surrounding gardens’ hydrangeas as black crows fly overhead. 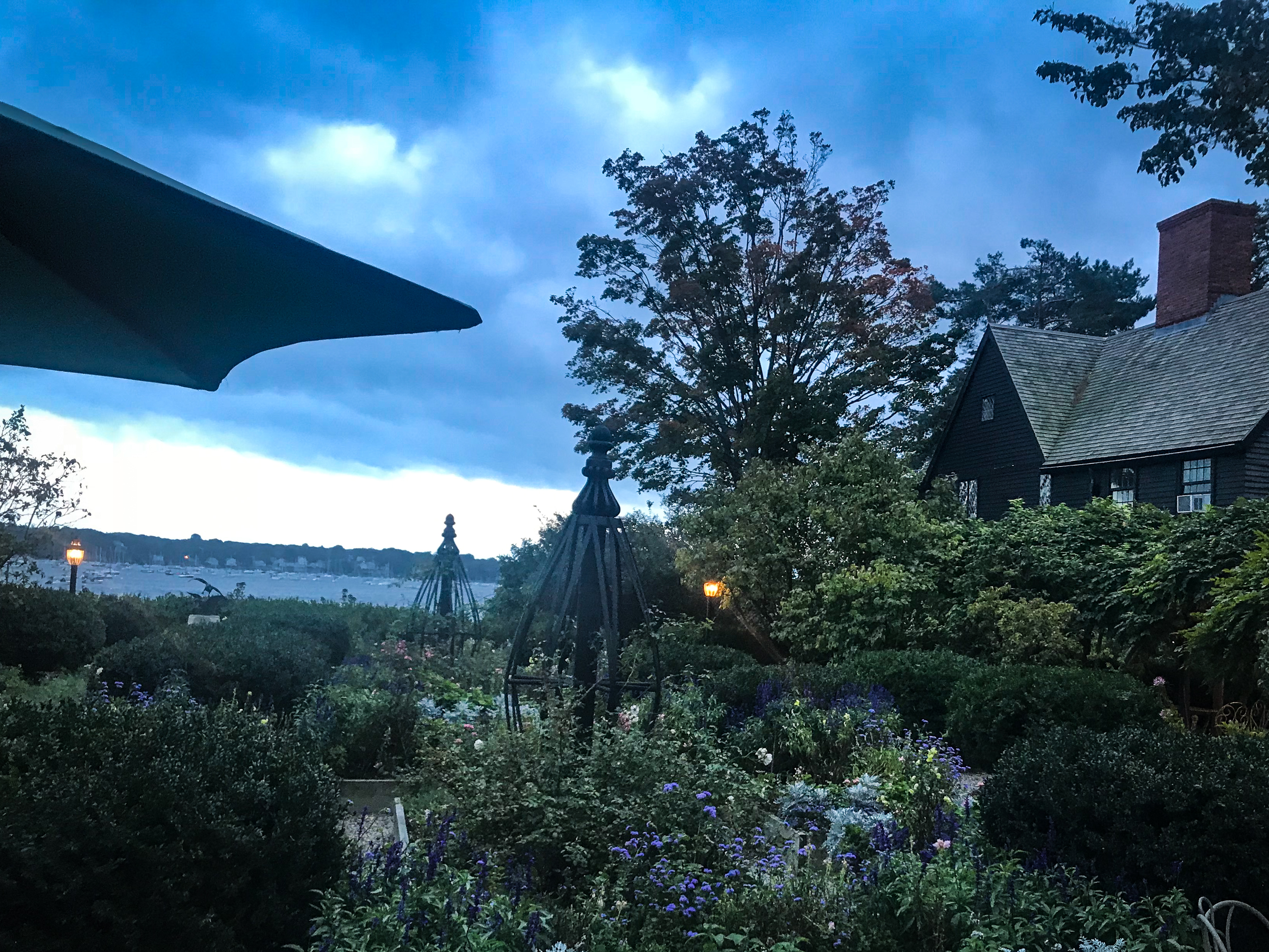 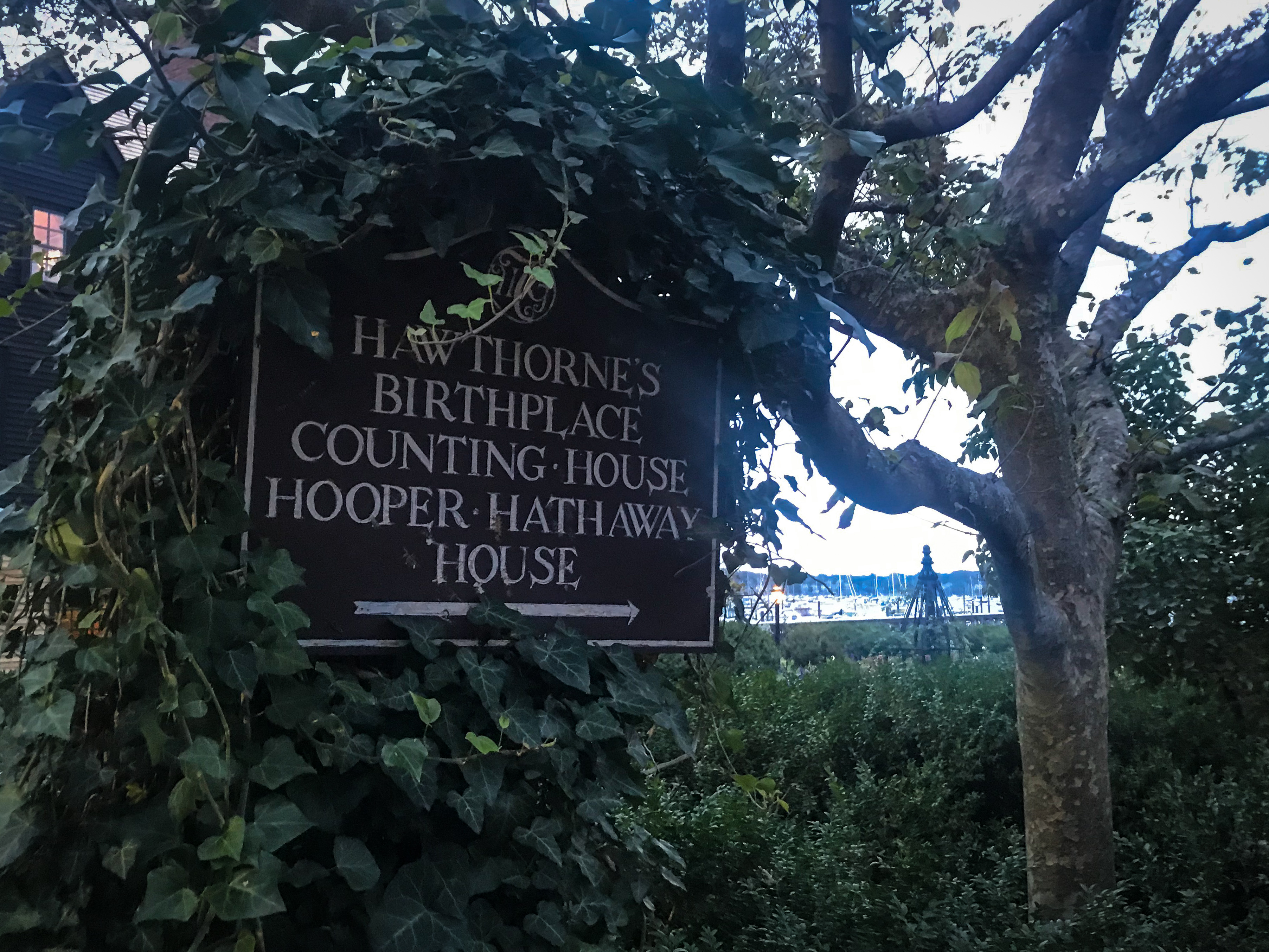 Visit Nathaniel Hawthorne’s birthplace and tour the Turner-Ingersoll Mansion, one of the country’s largest timber-framed mansions.

Hawthorne best set the scene: “Halfway down a by-street of one of our New England towns stands a rusty wooden house, with seven acutely peaked gables, facing towards various points of the compass, and a huge, clustered chimney in the midst.” Take a guided tour of the Turner-Ingersoll Mansion (aka House of the Seven Gables, one of the country’s largest timber-framed mansions), check out Hawthorne’s birthplace, step inside a series of 17th, 18th and 19th century historic buildings, stroll the Colonial Revival waterfront gardens and stop by the gift shop for literature on architecturally significant homes in the area. 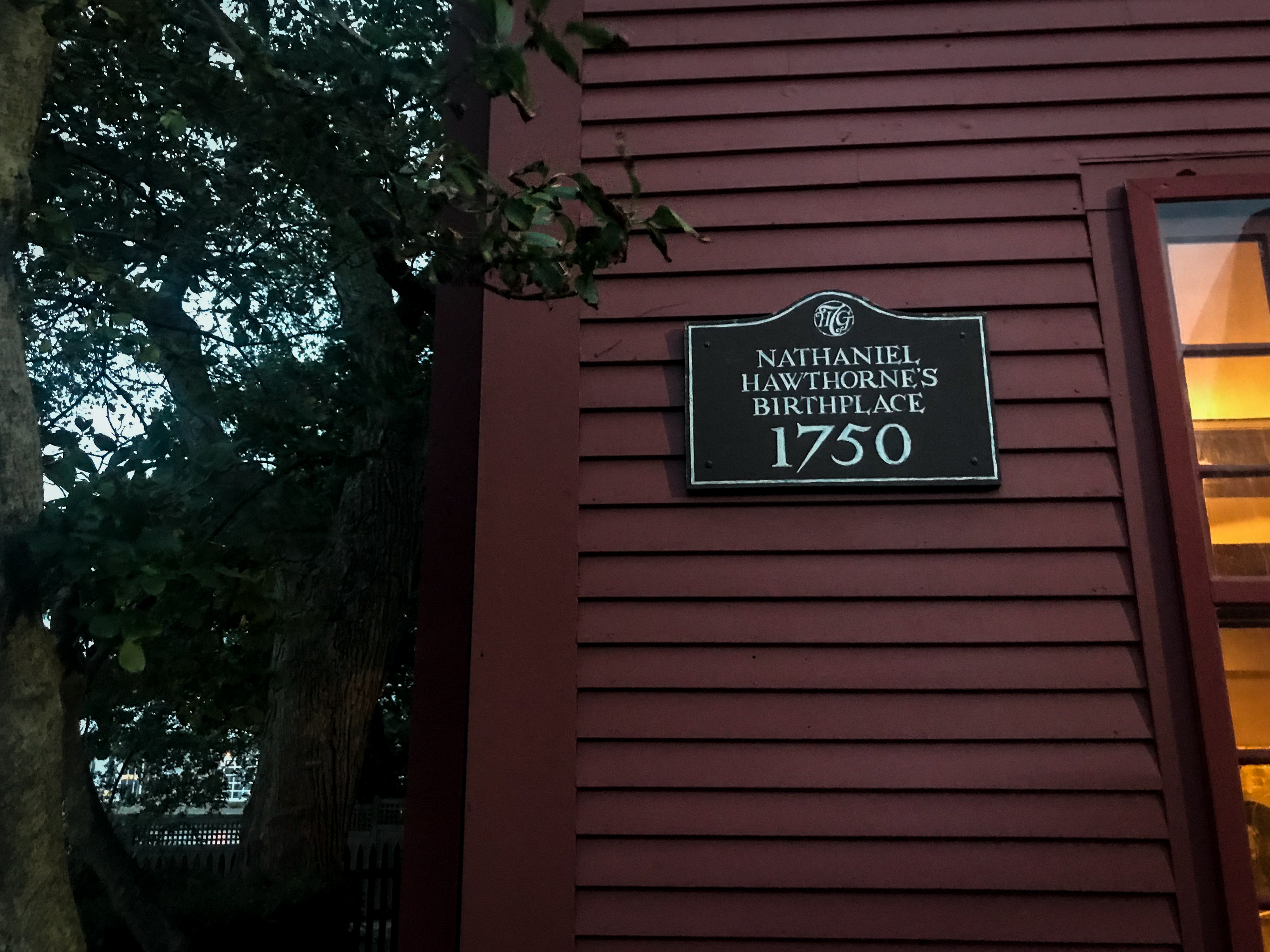 Judge John Hathorne never expressed regret for convicting accused witches, so the family believed they were cursed; Nathaniel Hawthorne even changed the spelling of his name to distance himself. 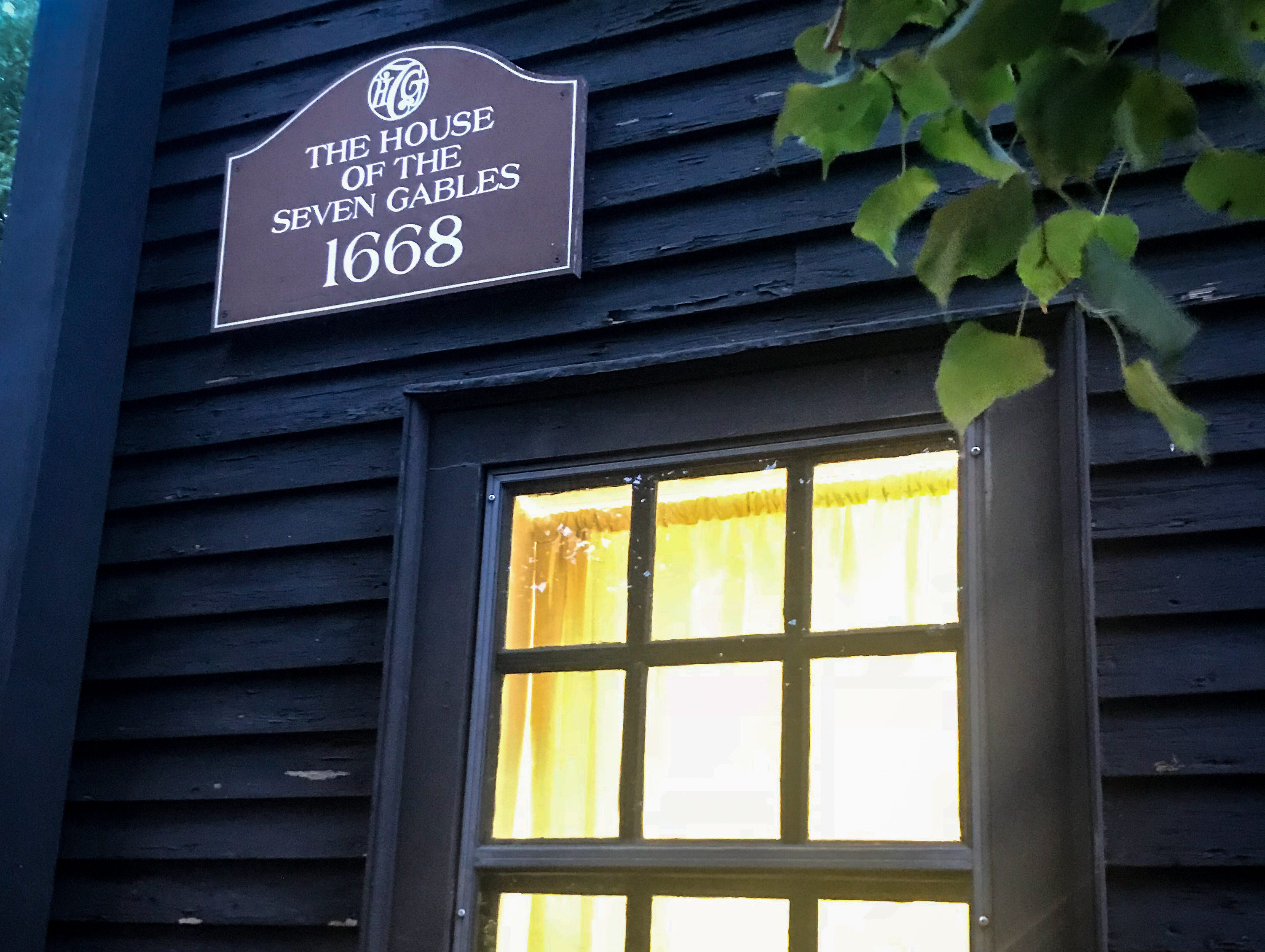 This 1668 home set the scene for Nathaniel Hawthorne’s “The House of Seven Gables,” and The House of the Seven Gables is one of the oldest surviving timber-framed mansions in North America.

Stormy weather at Salem Harbor, which is considered the birthplace of the National Guard. Fuel up with a cup of chowda at the Witch’s Brew Café before heading to see Salem’s modern architecture in action at Salem State University. In 2013, Shepley Bulfinch architects designed a state-of-the-art library at the heart of its campus. Its orientation forms a quad that’s a favorite outdoor meeting place, while the interior’s sky-lit atrium offers another inviting spot. The façade features glass paired with NBK Terracotta‘s profiled panels in two shades of a warming orange-red with a natural finish. 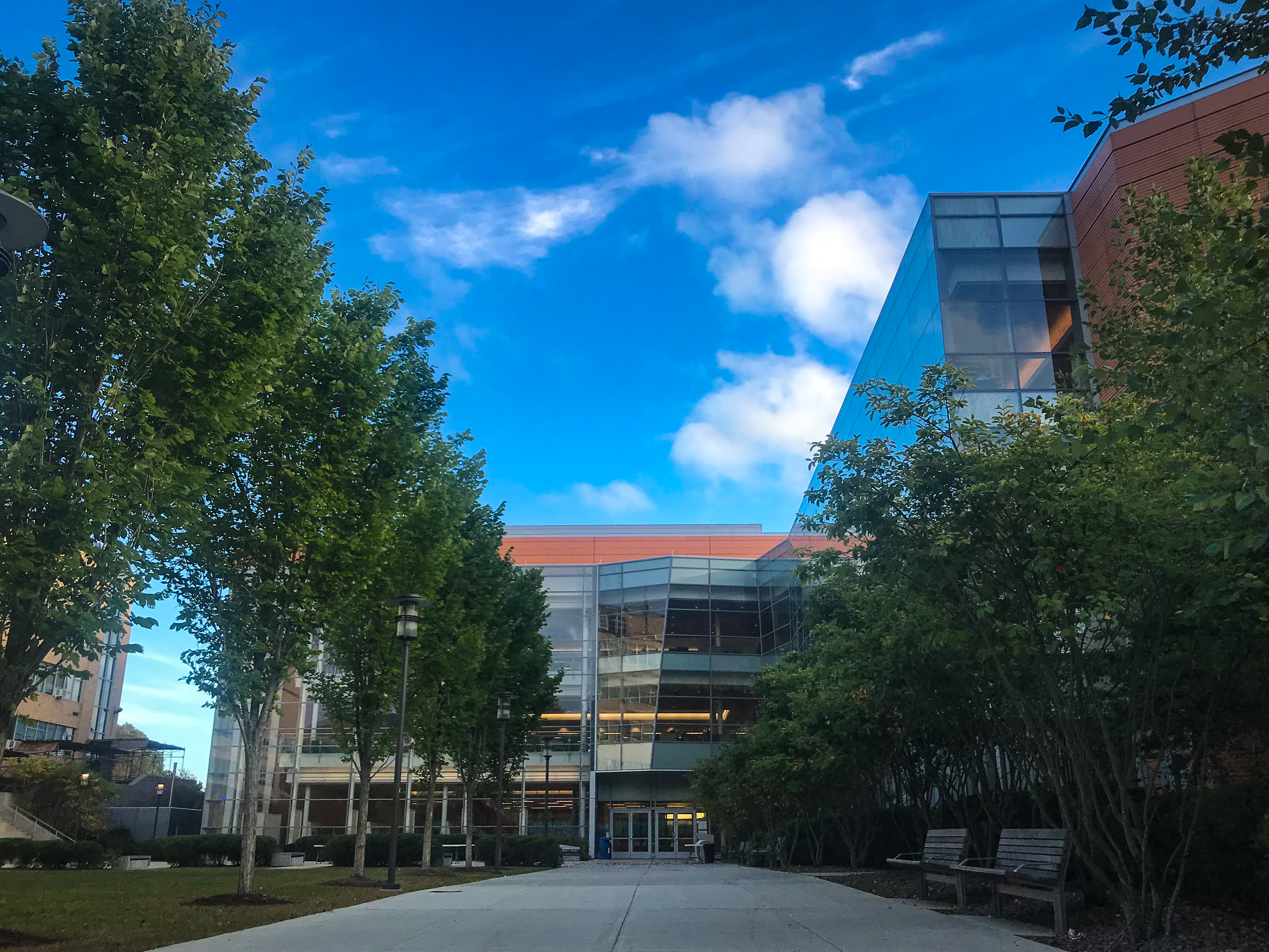 The library’s lush outdoor quad space has become a popular meeting place for students and faculty. 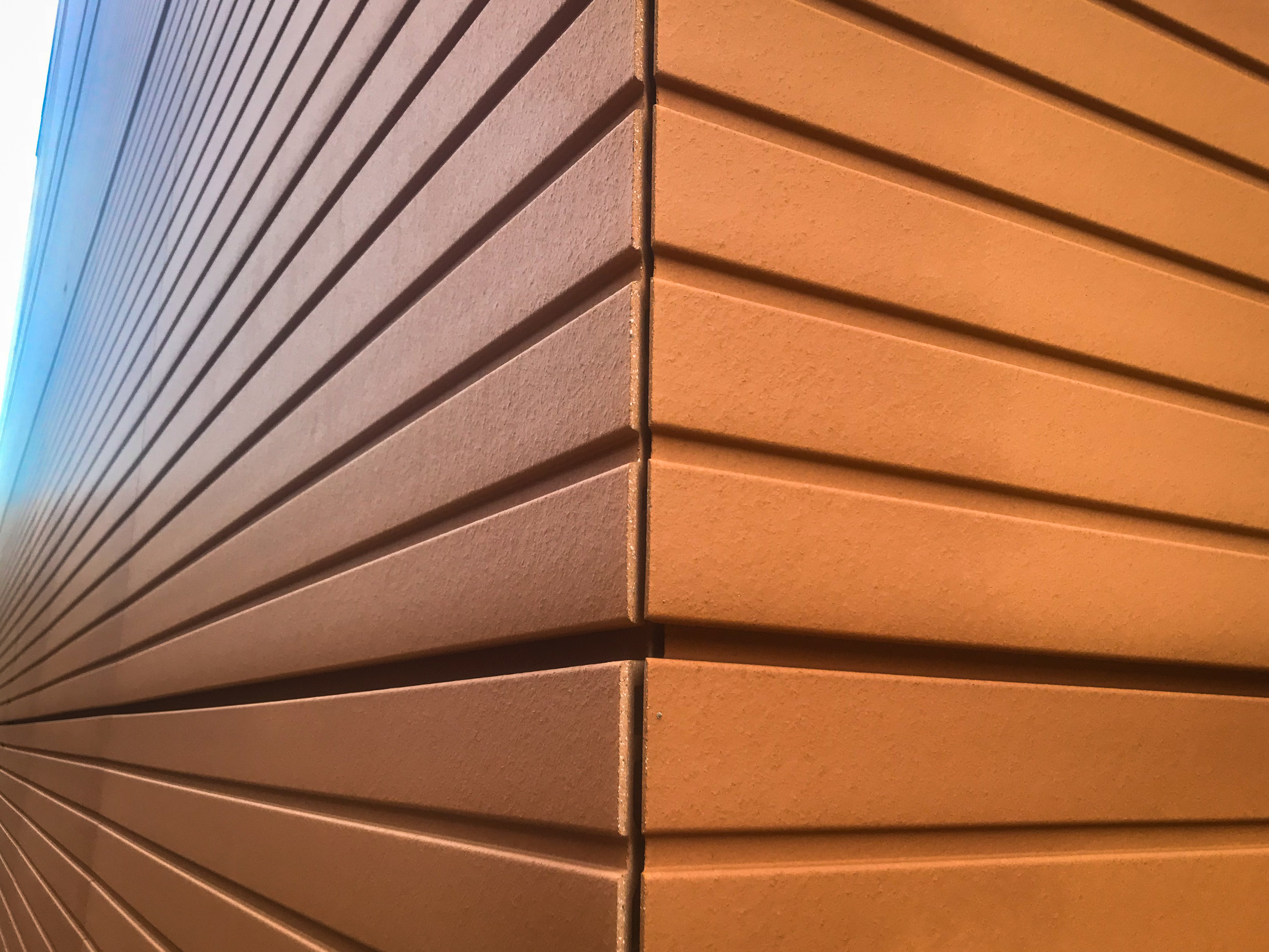 During installation, NBK Terracotta experts kept a watchful eye on the project, located just a few miles from their offices. Today, they occasionally bring visiting clients to the site to check out the exterior’s TERRART panels in person, and observe how the durable cladding material gracefully ages with time and weathering, while maintaining a distinct and colorful look. While in town, check out the Salem State University Speaker Series, which has featured Bill Clinton, George H.W. Bush, Jay Leon, Maya Angelou, Robert Redford, and the Pats’ hometown hero, Tom Brady. 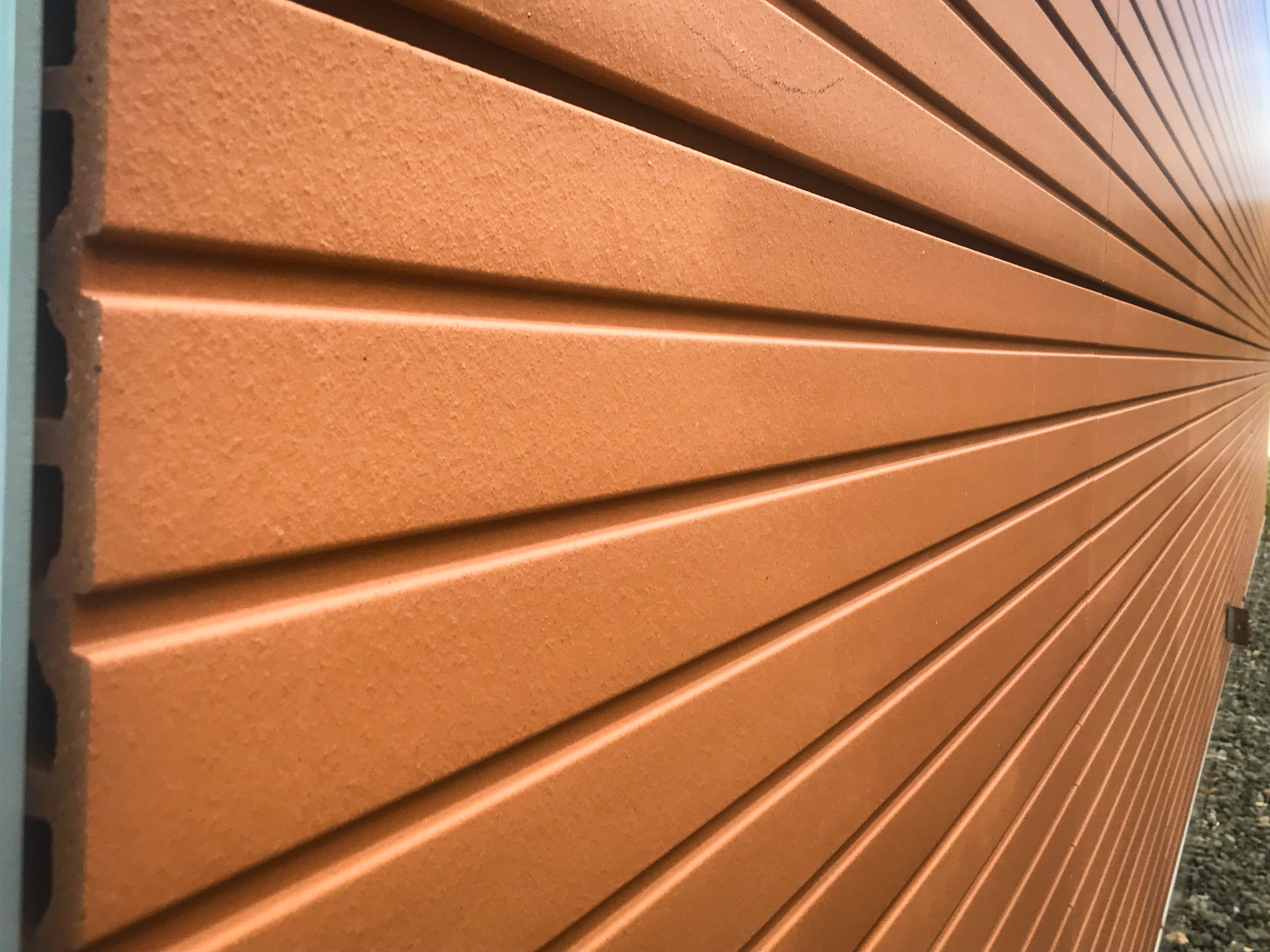 During installation, NBK Terracotta experts were able to keep a watchful eye on the project, located just a few miles away from their offices. 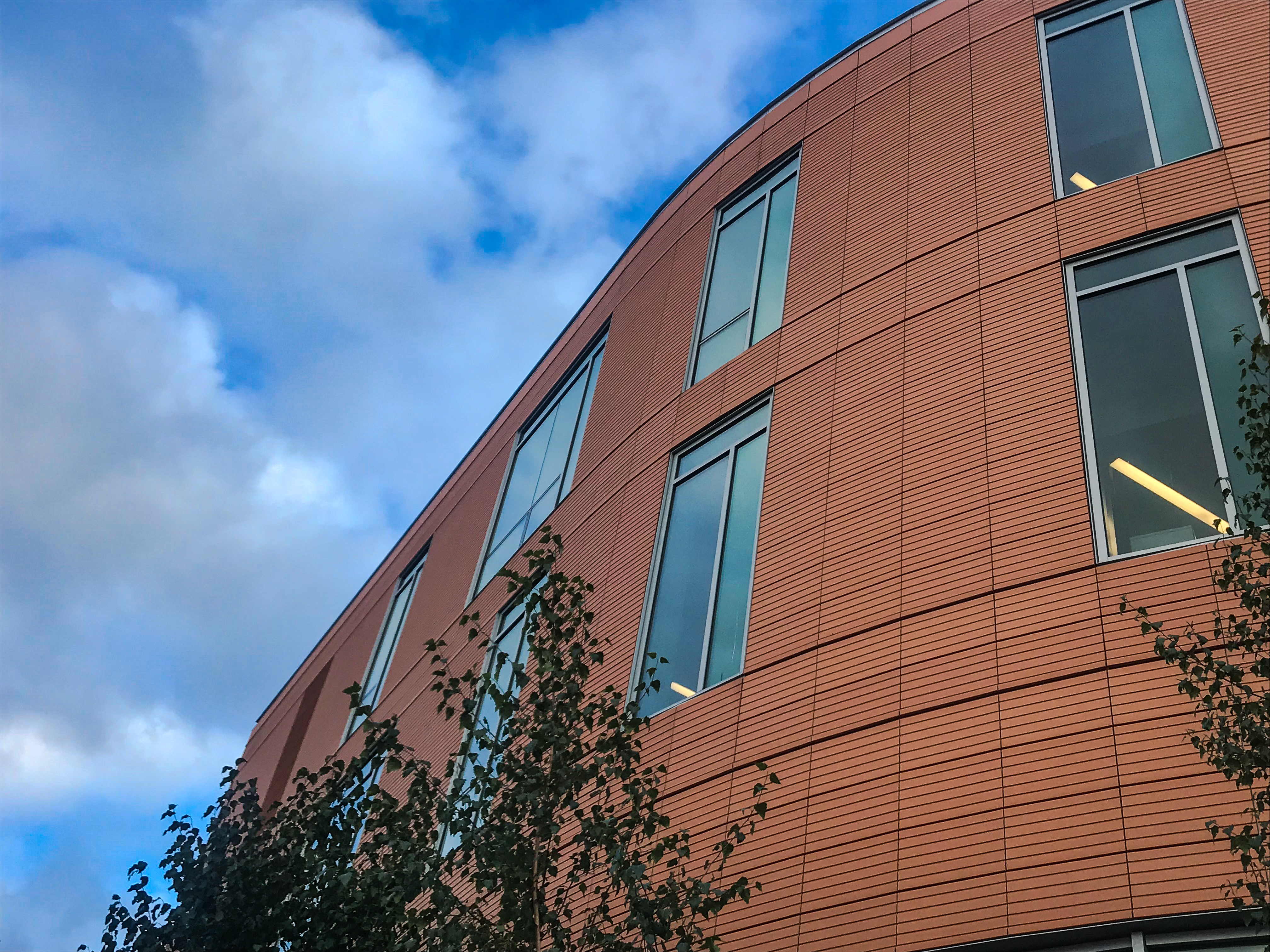 Architectural aficionados will appreciate the contrast of switching gears from Salem State’s sleek orange exterior design to going back in time to the Witch House’s foreboding black façade. The spooky site was once home to Jonathan Corwin, one of the Puritanical judges in the Witch Trials. Today, it’s the only structure that still stands which has direct ties to the Salem Witch Trials. Considered a first period home, the stately house was likely built sometime between 1620 and 1642. It includes a typical design plan that’s one room deep with a prominent central chimney and a second story overhang, a steep pitch in the roofline, small and few diamond-paned casement windows, minimal decorative exterior details, and a timber frame. Tours focused on its 17th century New England architecture and furnishings give visitors insight into what colonial life may have looked like at the Corwin house.

Rumors still swirl that accused witches were interrogated at Judge Corwin’s home, but there are no documents to support this. Instead, we do know that interrogations were done at either the Old Meetinghouse (located nearby at 231 Essex St.) or at Ingersall’s Tavern. The spooky Witch House was likely built between 1620 and 1642, and was once home to Jonathan Corwin, a judge in the Witch Trials. 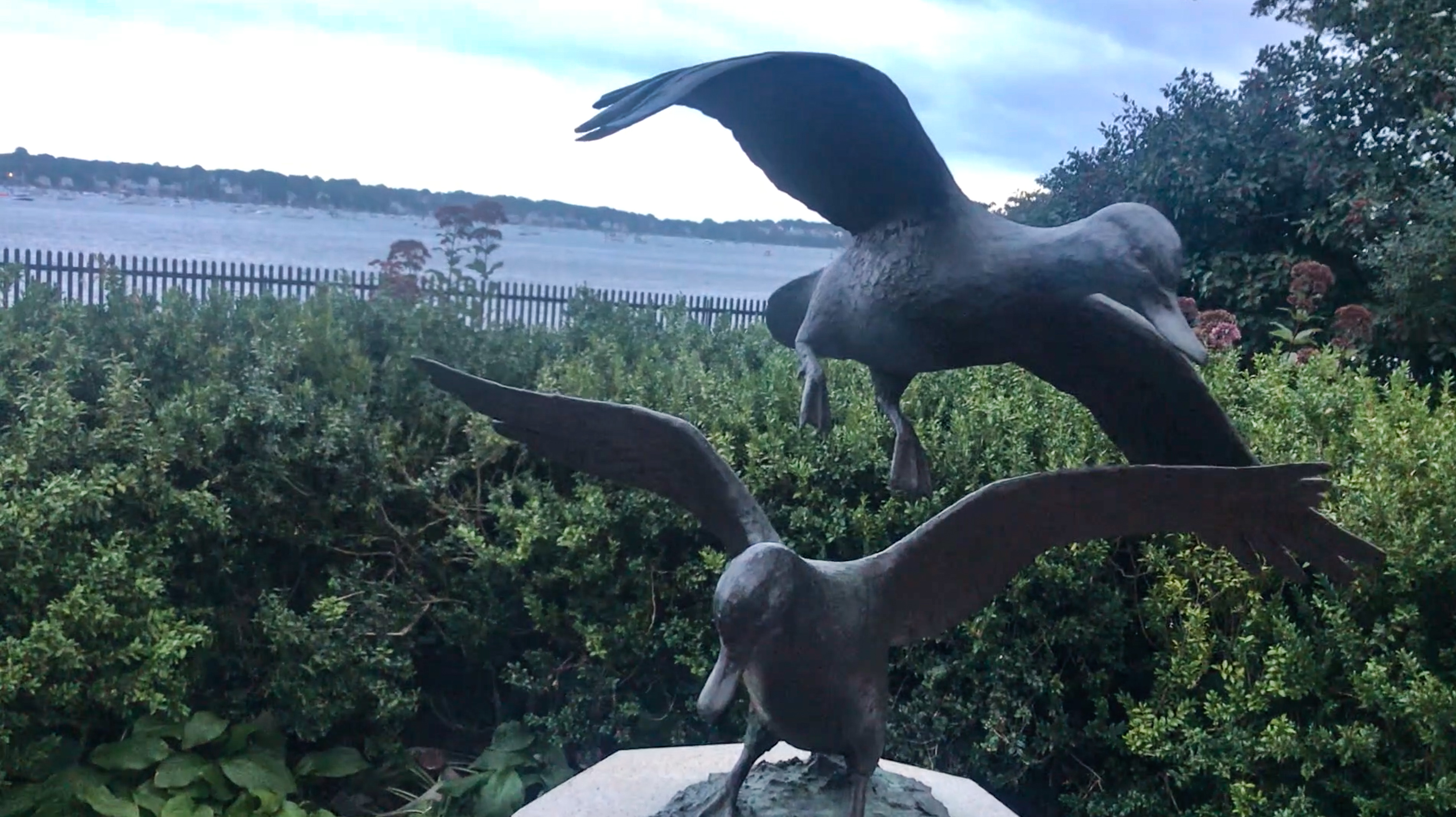 Over one million tourists visit Salem each year, bringing in at least $100 million in spending yearly. 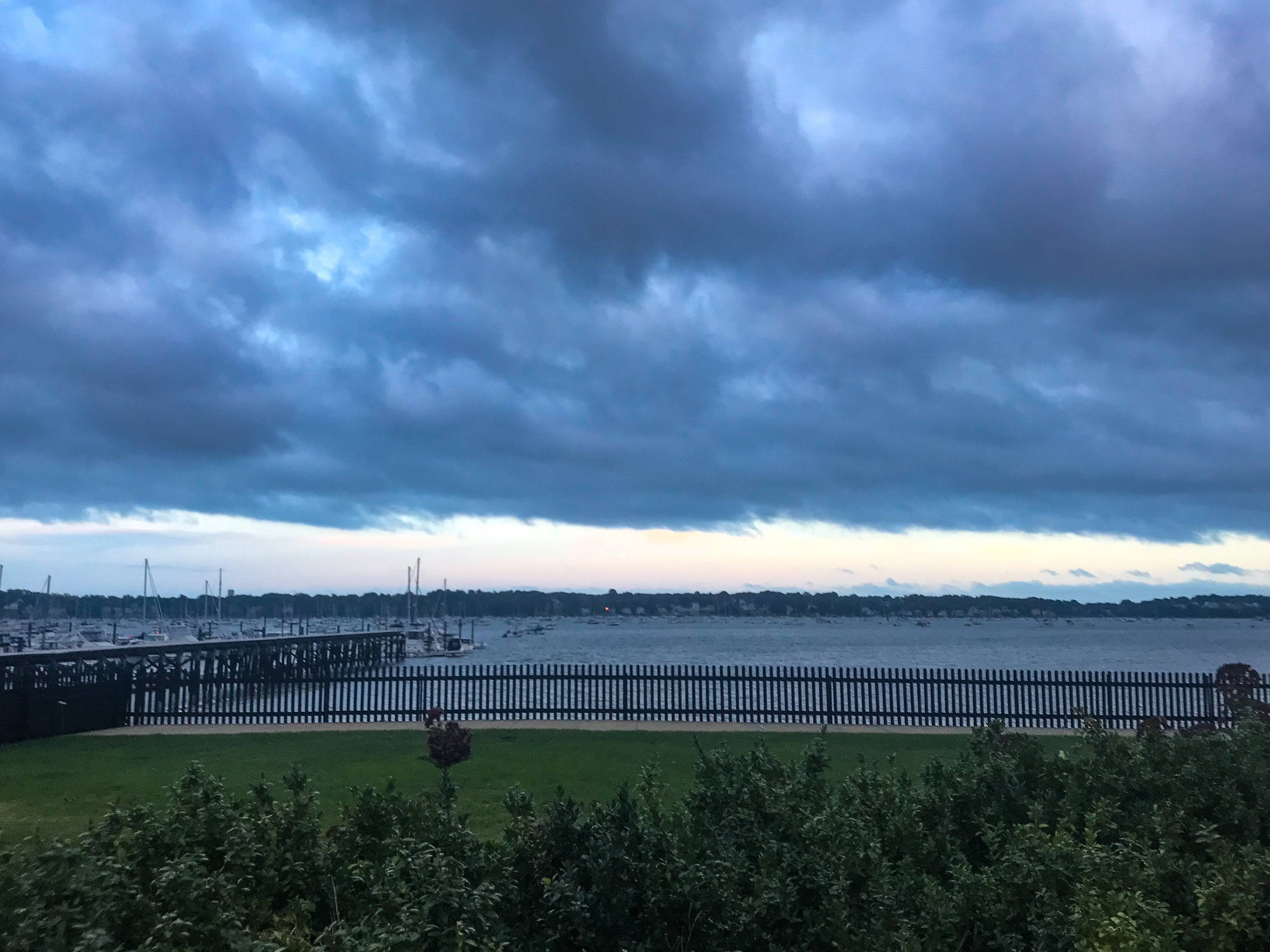 The mysterious yet beautiful gardens at the House of Seven Gables overlooking Salem Harbor.

Salem is rich in haunted history, but a bronze statue of TV’s favorite witch, Samantha, who tried to live a regular married life in the 1960s, has become a quite popular selfie spot. While the Bewitched statue can’t twitch her nose, some visitors believe giving it a little rub can spur magic. The statue was donated by TV Land, though perhaps surprisingly, the popular sitcom only featured two episodes set in Salem. These episodes are credited with helping Salem turn its dark history into a booming tourism business. Today, tourism accounts for at least $100 million in spending annually. In a town that celebrates Halloween from September 1 to November 1, Witch City seems like an appropriate resting place for Samantha, who’s depicted riding a broom before a crescent moon. “Bewtiched” only featured two episodes set in Salem, but this is credited with helping the town turn its dark history into the booming “boo business” it is today.

From here, you’ll want to hook a left on Washington St., and a right on Church St., and find yourself at the doors of Turner’s Seafood at Lyceum Hall. If you love a classic New England meal, stop by this beautifully designed restaurant. It boasts brick walls, high tin ceilings, oak floors and large pane glass windows on a street dotted with boutiques. Grab a corner table, order oysters rockefella, lobster pie and local beer, and watch as today’s “Salem witches” parade by. During the month-long celebration of Halloween and the fall harvest, over 500,000 people visited Salem.