The Eye Has to Travel (Up): Techstyle® Graphic ceiling panels bring color & pattern to the 5th wall

“The eye has to travel,” quipped the legendary fashion editor Diana Vreeland… a rule of thumb that not only applies to design from head-to-toe, but also from floor-to-ceiling.

“When you walk into a room you want it to be balanced enough that your eye is really traveling around it and you’re able to appreciate all of these different patterns and textures,” says Andrea Magno, a color and design expert at Benjamin Moore. “Then all of the colors are helping to complement that and pull it all together.”

To maximize that effect, Hunter Douglas Architectural introduced Techstyle® Graphic, a collection of customizable acoustical ceiling panels in a versatile range of colors and patterns. The eye-catching offerings add intrigue without overwhelming the senses, and aim to help designers take their unique vision through the roof. The graphically-based ceiling panels inject personality into interiors and extend the atmosphere of a space up to the ceiling, an oft-neglected “fifth wall” of a room.

“Depending on the application,” he says, “interior designers will choose a subtler and barely colored pattern or a more daring and bold alternative.”

The Techstyle® Graphic collection, created with collaborators HOK and Guillaume Martin of the French design firm, iwoodlove, is available in four style categories in colors like latte, seaglass, coal, concrete and copper penny. Kuperus explains that the “asymmetric” patterns like a lattice print or thin cross-crossed stroke or grid lines are “simple, artistic and low design risk.” Meanwhile “organic” options including small and large hex-shaped prints, mosaic compilations and branch-inspired graphics are “natural, warm and more daring for a ceiling surface.” He characterizes the “parallel” group of offerings like delicately curved vertical and horizontal lines, and linear horizontal lines and streaks dispersed in a range of width, as “directional, clean, timeless and modest.” Lastly, Kuperus adds that at the more extreme end of the spectrum, “dimensional” offerings like small and large origami-driven prints and crinkled newspaper patterns, are “exciting, different and controversial.” 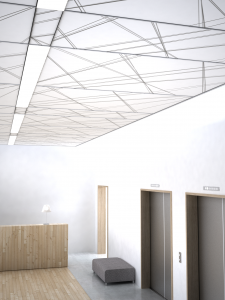 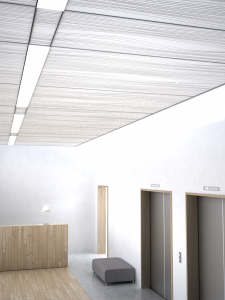 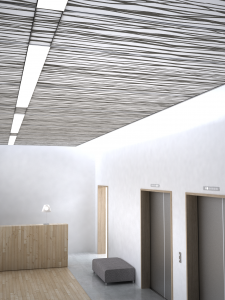 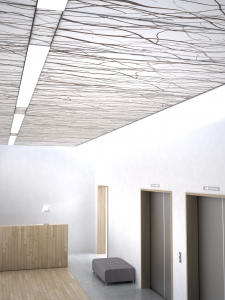 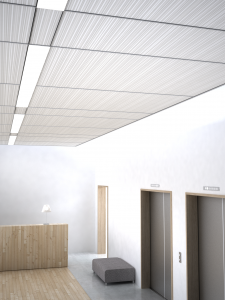 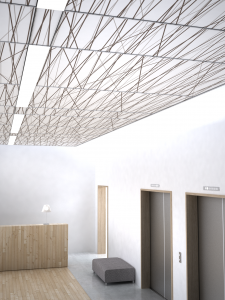 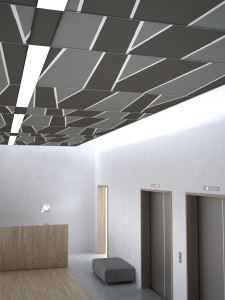 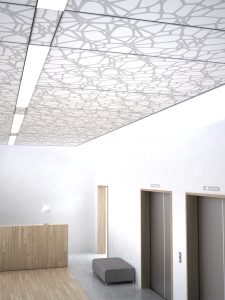 Benjamin Moore’s expert says it’s no secret that the color you paint your walls impacts your perception — from symbolic to associative to synthetic to emotional. Studies have shown that “human-environment-reaction in the architectural environment is to a large percentage based on the sensory perception of color,” according to an Archinect article by Frank H. Mahnke, in which he proposes that “the goals of color design in an architectural space are not relegated to decoration alone.”

Likewise, surface-pattern designs send signals to the brain that can trigger reactions from excitement to a state of Zen. Because form follows function, the curated assortment is designed to meet the needs of different environments. After all, a stark coal-and-white triangular origami print might be a sensational, fashionable option for a gallery space whose walls are typically whitewashed. By contrast, a more calming, concrete shade in a simple curved line pattern might be better suited in a dentist’s office. This softer panel quietly adds artful fine details to an otherwise overlooked surface.

“You want to set a mood that’s going to help to set the stage, whether it’s to get people to buy something if they’re in a store,” says Magno, who adds that the color used should complement products to enhance the overall retail experience. Or, she says, “if you’re in a doctor’s office, you want it to have a certain mood too – if people are on edge and they’re nervous, they want it to be more calming.”

She says it’s also important to remember, however, “to make sure that the architecture of the room lends itself to creating something interesting on the ceiling…If it works for the space, I think it’s something worth exploring and it doesn’t have to be a huge amount. A lot of times with using more vibrant colors, a little bit can go a long way.”

Mahnke writes that overstimulated environments with strong color intensities, too many complex patterns or contrasting color harmonies can cause measured tension and psychiatric reactions. On the flip side — and far more common in the ceilings space — understimulated environments with weak color schemes can cause feelings of restlessness, irritability, difficulties in concentration and more.

In fact, in “Color and Visual Comfort,” Cecilia RiosVelasco summarizes the findings of a series of optimization tests of worker productivity and mood in offices with different interiors. Subjects were tested in offices which were painted red, green or white. Even though the subjects in the white office believed the environment was less distracting, they actually scored much higher in errors than those in the red office. Further, there was a “significantly lower confusion-bewilderment post-test mean score” for those in the red versus green offices. Other varieties of the experiment yielded similar results.

The trick is applying the right Techstyle® Graphic ceiling panel that speaks to the space and people who use it.

“Having something interesting on the ceiling like patterning, particularly the more organic ones like (Hunter Douglas Architectural) is introducing, can help to enhance that tranquil kind of feeling that you want to have” in anxiety-inducing places like medical examining rooms, Magno points out. “If the surroundings are more appealing, I think that helps to set a more relaxed mood.”

Incorporating graphic elements such as Techstyle® Graphic ceiling panels adds a playful yet subtle element of surprise. Guests who look upwards will discover elegant curves, parallel and crisscrossed lines, folds, swirls and angles that come together to tell a bigger design story. Such designs make public spaces more personable by elevating colors and patterns to an underutilized terrain that’s designed precisely with viewers in mind.