The Reinvention of a Carousel – and The Battery

A recent AIA-sponsored walking tour of Battery Park highlighted a historic, picturesque link between New York Harbor and the continuing rejuvenation of Lower Manhattan. Focused on the Seaglass Carousel — an intriguing and technologically advanced twist on the traditional carnival ride — the tour was led by Layng Pew of WXY Architecture, which helped design the carousel, and Hope Cohen, COO of the Battery Conservancy.

The tour began at the southeast end of the park, where the Seaglass Carousel features a nautilus shell of aluminum containing a shining, spinning school of 30 fiberglass fish. Here’s how they move:

“The idea was to create an enclosure that was actually a part of the ride, not just a roof over a carousel… the whole theme of this ride is in every detail,” said Pew. That’s different than the classic approach to carousel design, he added, where “the carousel is an amusement, and then there’s some sort of shelter over it.”

Pew and Cohen then led the select group of walkers — including architects, fans of architecture, journalists and AIA representatives — down to the water’s edge. From there, observers got a compelling view of the Statue of Liberty and Ellis Island, backed by a grove of London Planetrees whose branches wave in a steady breeze off the water. 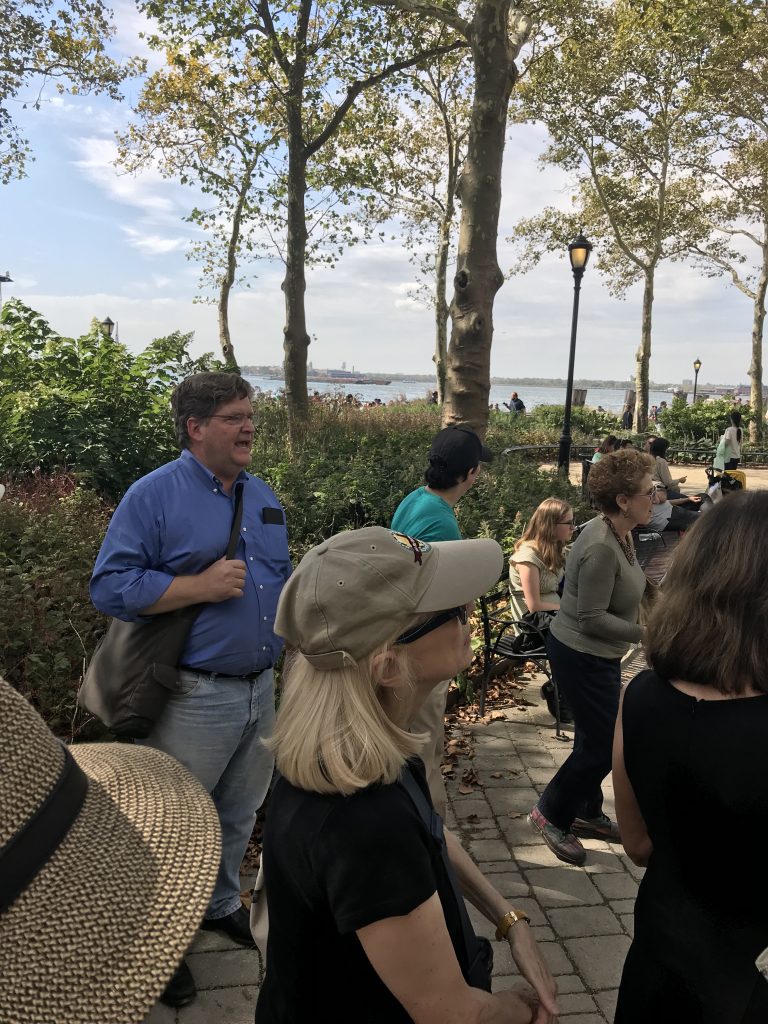 The tour was led by Layng Pew, of WXY Architecture, & Hope Cohen, COO of the Battery Conservancy 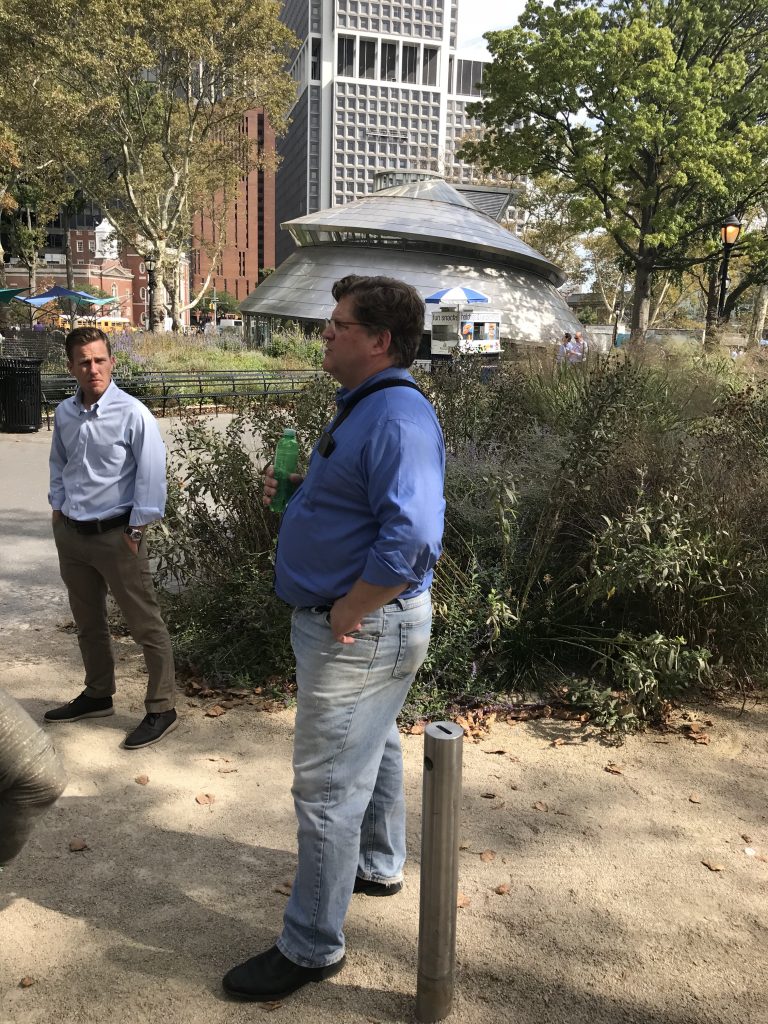 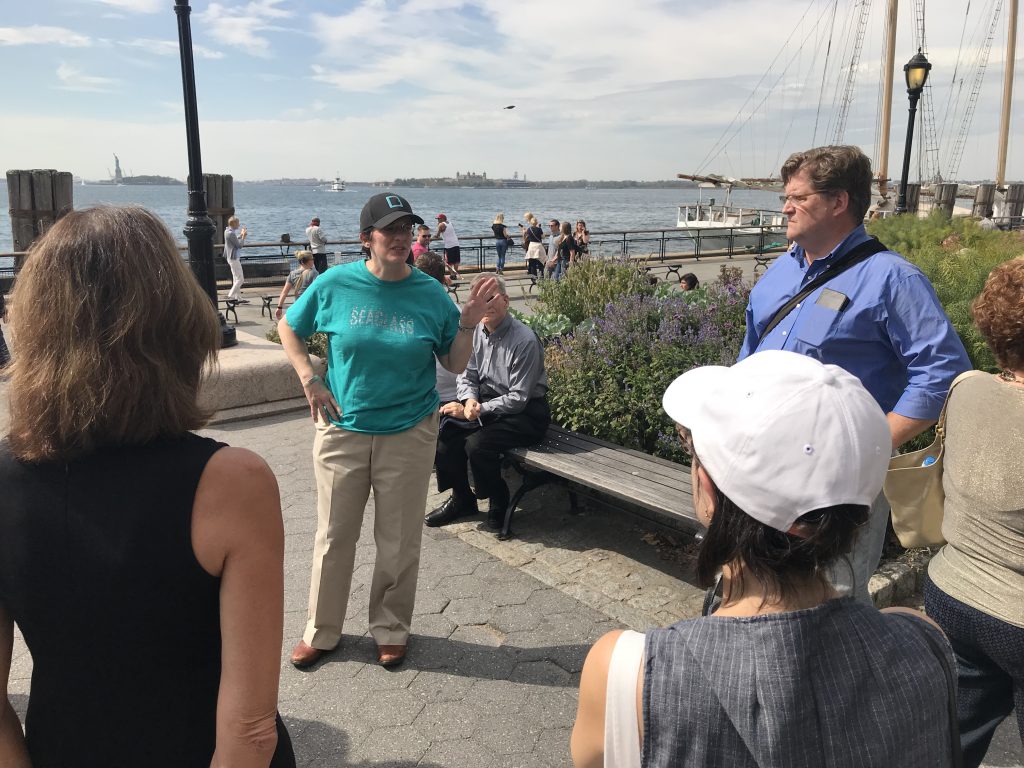 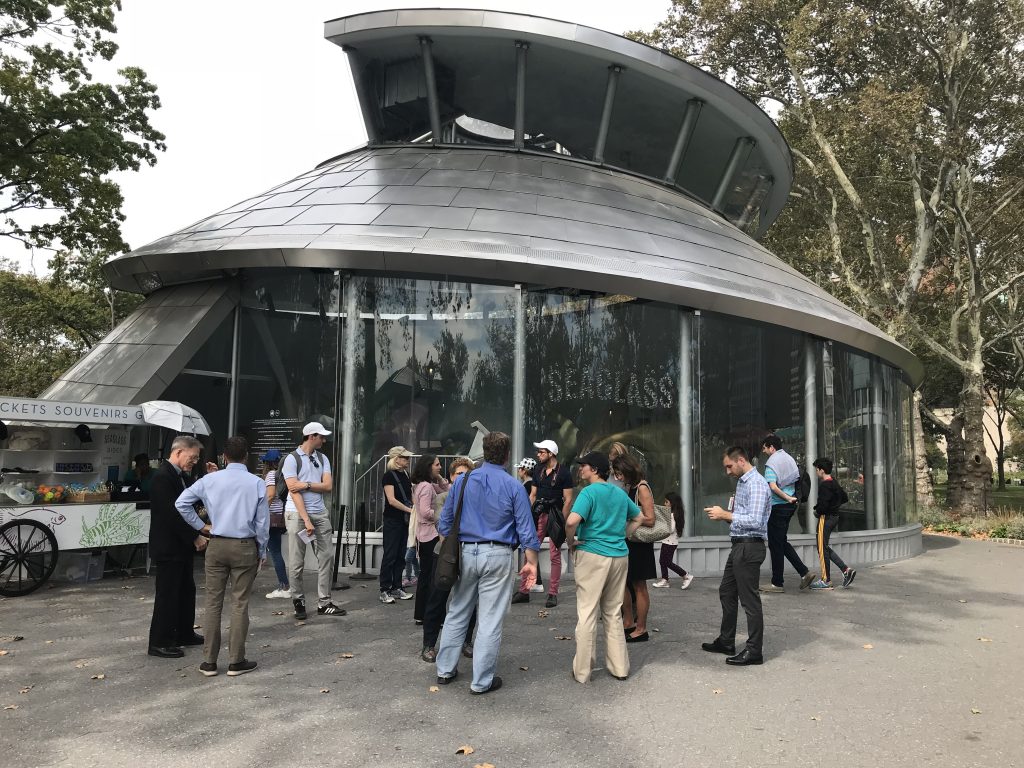 Up until 1994, the site was abandoned by nearly everyone except fishermen casting off of the sea wall.

From that vantage, it was hard to imagine that up until 1994, the site was abandoned by nearly everyone except fishermen casting off of the sea wall. (The 1985 movie Desperately Seeking Susan shows the spot in this neglected state, along with an under-construction view of Lady Liberty covered in scaffolding.)

According to Pew, that remained the essence of what he and his colleagues at WXY found when they began working on the site. “It was a forgotten patch,” says Pew. “There were asphalt paths that didn’t make any sense, broken picnic tables, and concrete benches.”

In 2003, the city broke ground on new gardens by Dutch landscape designer Piet Oudolf and the Bosque kiosks and park benches designed by WXY. The idea for a carousel began as a way to bring light and movement to the southeast corner of the park. Making the carousel focus on fish, instead of the traditional horses, came from the site’s historical connection to the New York Aquarium, which was originally located there. 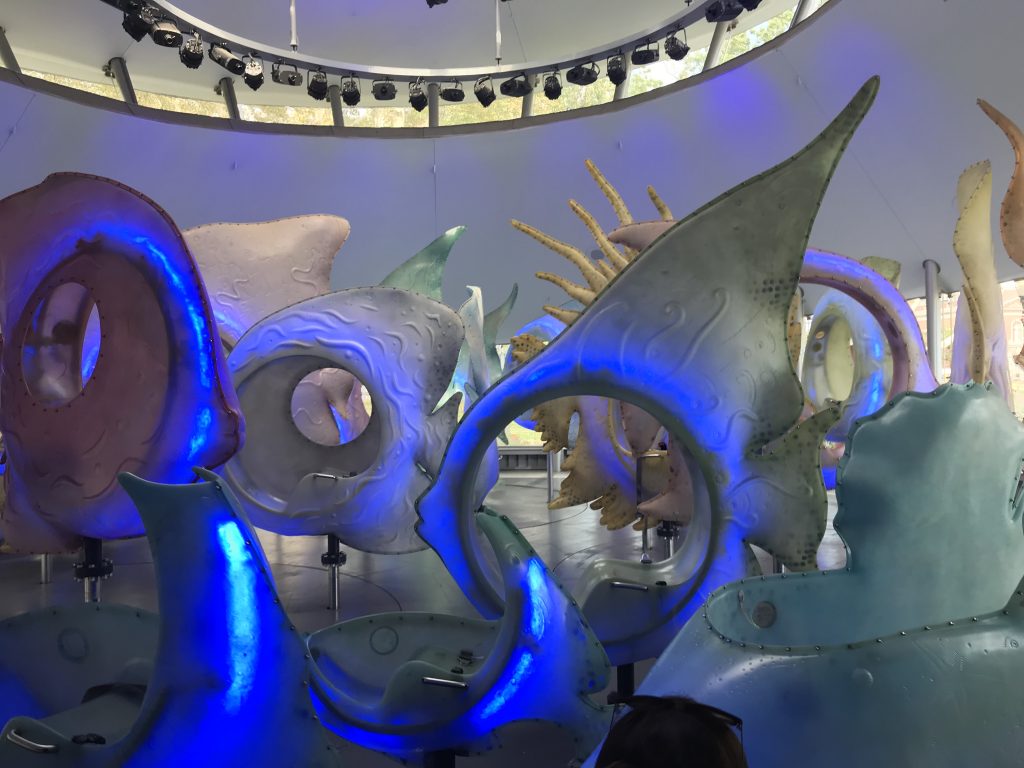 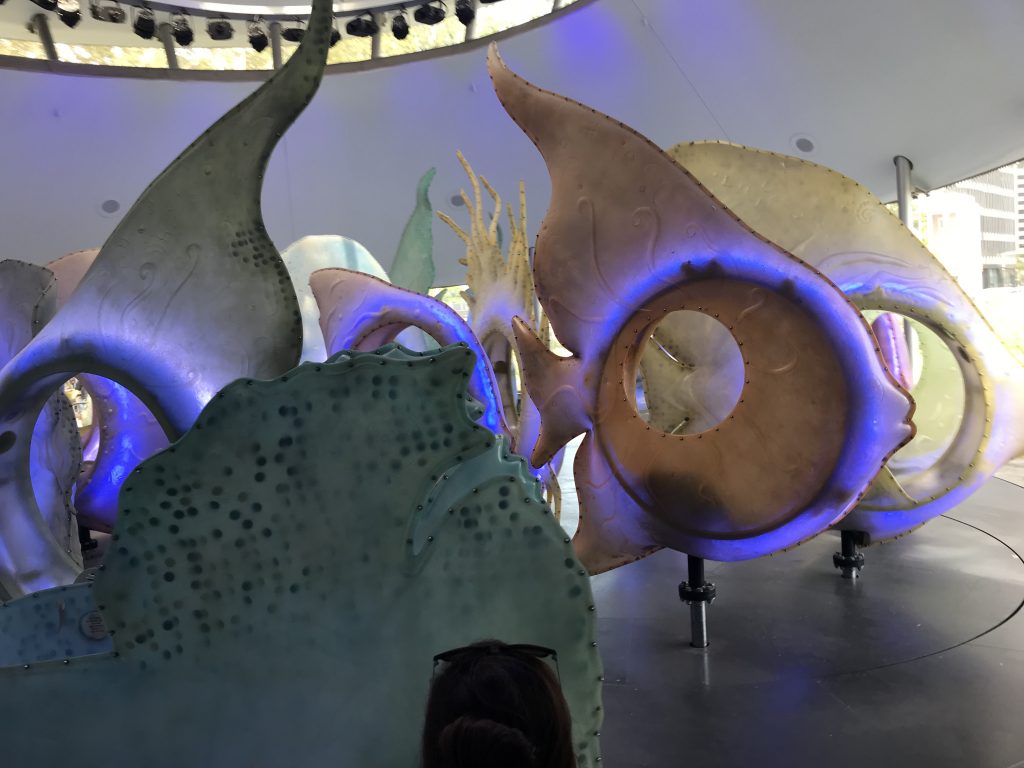 The Seaglass Carousel is a high-tech, high-style twist on the traditional carnival ride 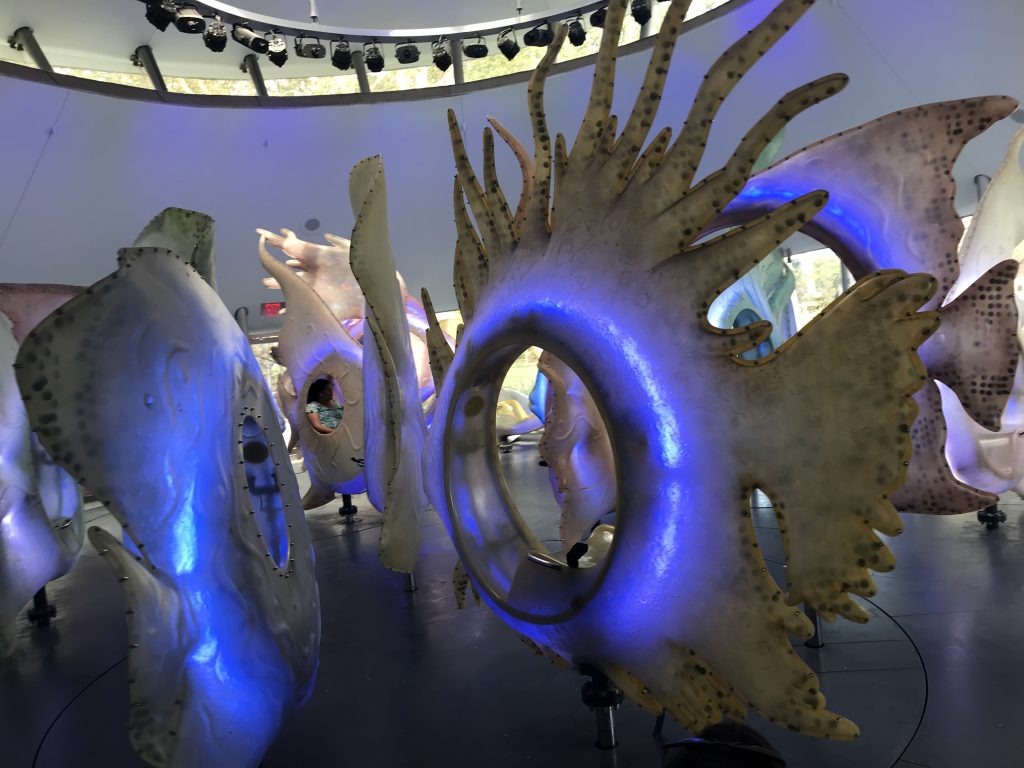 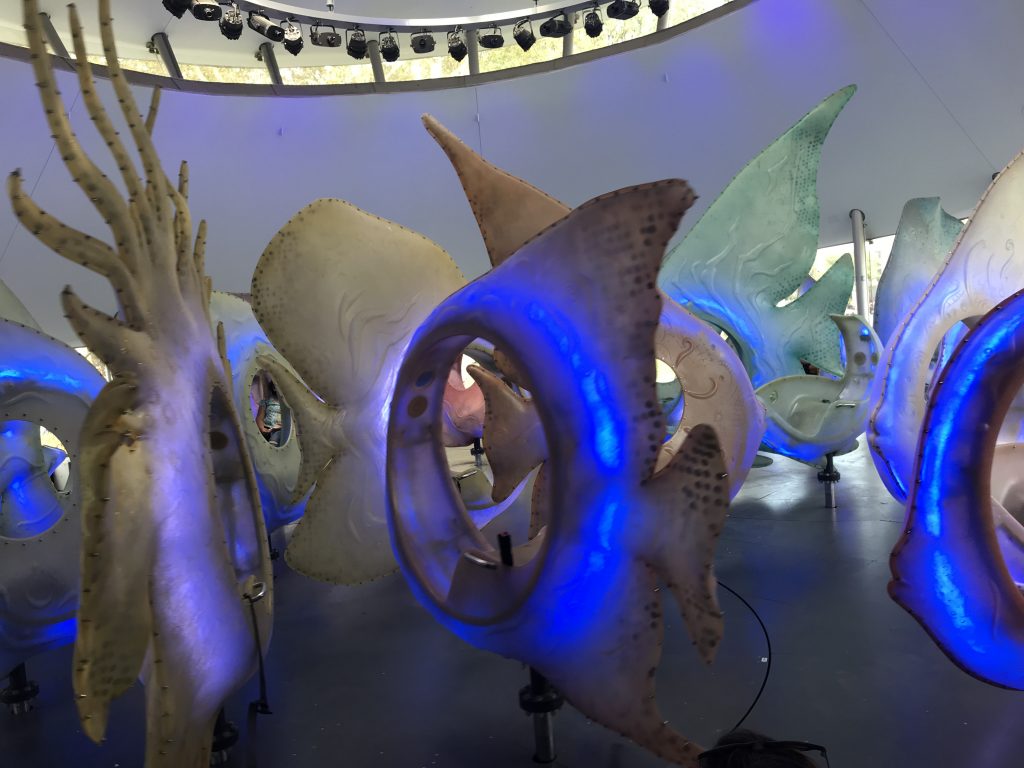 The choice of fish sparked many additional ideas and innovations. The team wanted the ride to provide an immersive experience of being underwater, with the building, lighting, music and movement all combining to provide a magical underwater environment. To accomplish this, the team brought in theater designers George Tsypin Opera Factory (set designer of The Little Mermaid on Broadway) and Industries Show Canada (who has worked with Cirque du Soleil) to help them create innovative lighting, electrical and mechanical systems. Here’s Pew’s description:

“The Seaglass Carousel is really special for me,” concludes Pew. “I essentially started at WXY in 2006 because of it.”