While the cooling properties and classic versatility of white still beckon, architects and designers are rethinking how they treat white surfaces: texturing and sculpting them on ceilings and walls, treating them with polishes and glazes on façades and exterior surfaces, and softening them with dusty undertones in fabrics used for shades, blinds and interior furnishings.


Particularly in commercial spaces, white maintains an enduring appeal that can be constantly refreshed with accents. Using white in combination with impactful lighting and shading solutions can also transform how it works in an environment, using it to reflect light in museum and gallery settings, to eliminating shadows in medical offices, to creating dramatic contrasts in edgier, style-driven retail spaces and restaurants.


“The popularity in white is nothing new,” says commercial pattern designer and style expert Stacy Garcia, pointing out the longevity of design elements such as white tile on floors, walls, and façades. “Now we’re seeing this evolve with handcrafted versions adding more interest and texture to the surface and to the overall feel of the space,” she says. “It’s all about ‘dimensional white’… To avoid sterile and boring, white is being taken to the next dimension with … 3D forms and sculptural elements.”

Through techniques such as cutouts, dusted finishes and glazes, architects and designers are stretching the limits of white, stripping away any plain-vanilla persona by injecting more soul and dimension. Such reimagined whites speak to macro trends such as the desire for softness, comfort and purity in daily life.

At a K Street corporate office in Washington, D.C., the design called for terracotta baguettes with a city-slick treatment of white glaze on a portion of the street-level façade. Across the country in California, Richard Meier & Partners opted to have the manufacturer (NBK Terracotta) apply natural white terracotta tiles to the postmodernist San Diego Courthouse, including terracotta tiles mounted on their sides and dispersed at varying intervals, plus more tile and terracotta baguettes on the interior. 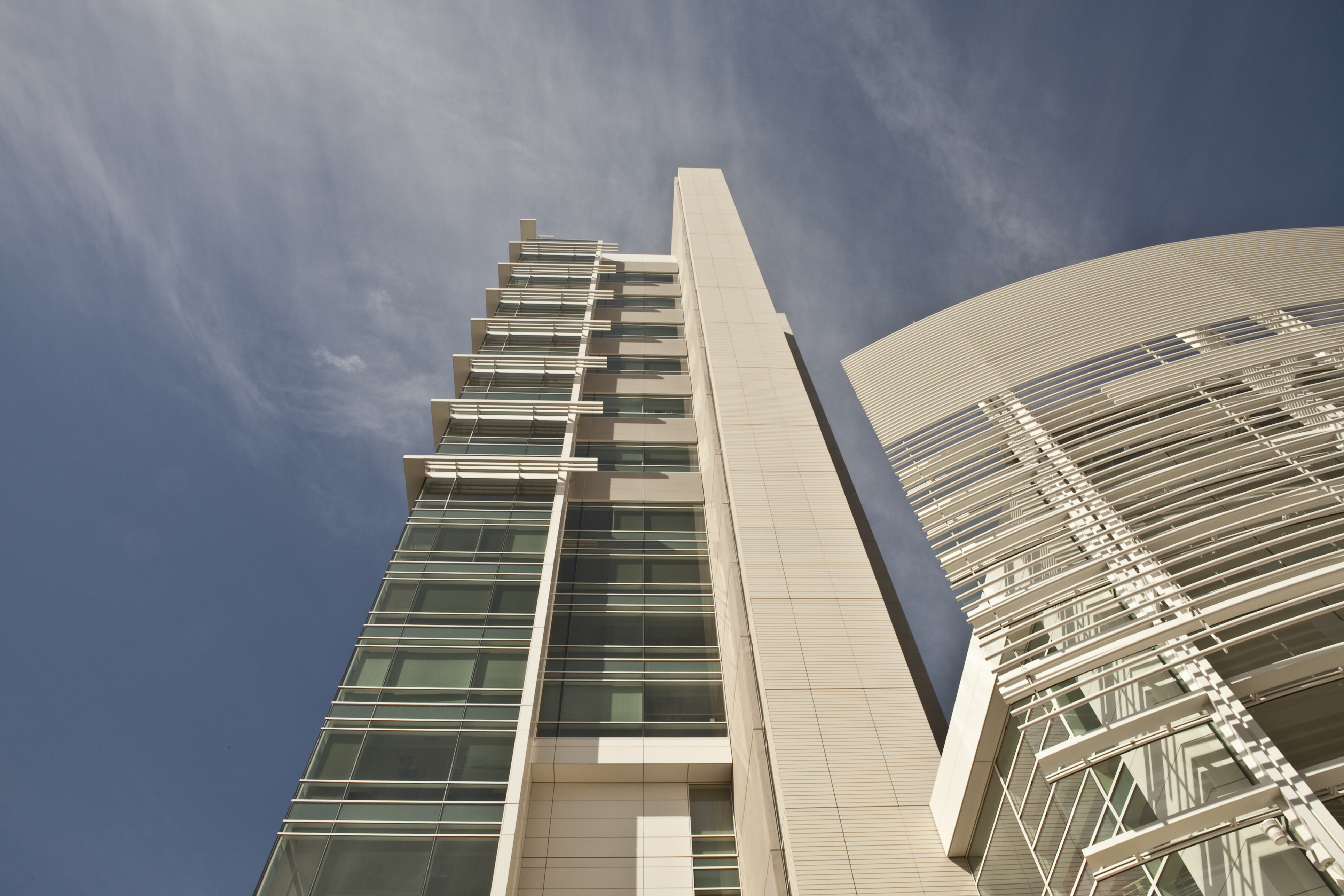 ◄ Back
Next ►
Picture 1 of 4
Meier used the same natural white (1.02-0) at the Edie & Lew Wasserman Building at UCLA, in a treatment that suits its surrounding environment. The shade was developed as a standard color due to the high demand for a white terracotta, and the NBK team internally refers to it as “Richard Meier white” since he “only uses this particular white,” a spokesperson says.


That’s fitting since it was Meier who once declared, “I think white is the most wonderful color of all because within it one can find every color of the rainbow.”

Formable, sustainable & strong, #aluminum is a top choice for #greenbuilding by architects & designers with #creativedesign. Click the link in our bio for our #AluminumToday Q&A with @metropolismag. • #fluentindesign #ceilings #lookup #interior #architecture #architectural 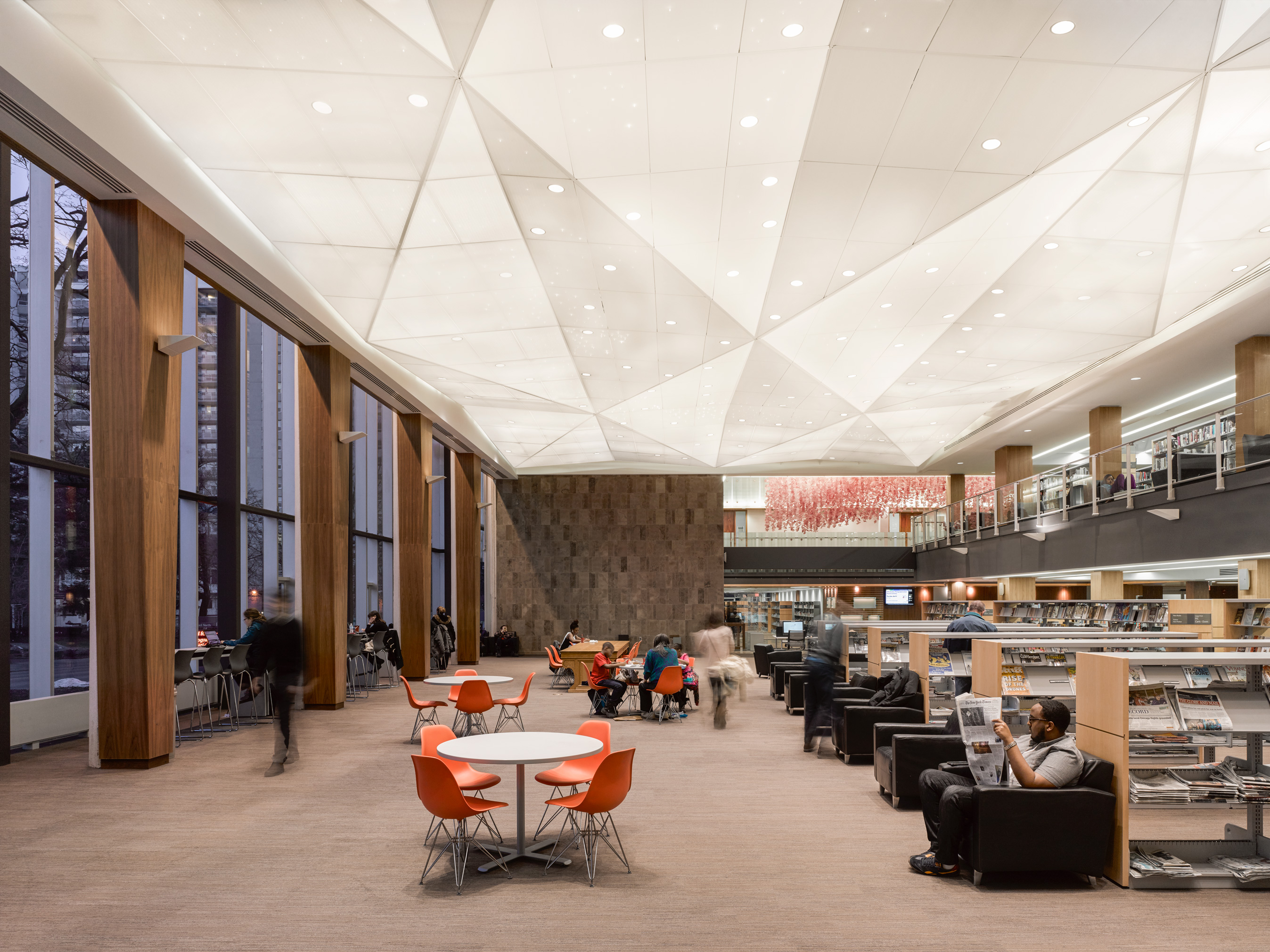 ◄ Back
Next ►
Picture 1 of 3
White can enhance and sharpen the geometry and directionality at the ceiling plane. A case in point: CBRE’s Denver office, designed by Gensler, which created a rhythm above the interior environment with custom-spaced beams in lightweight aluminum (Tavola™ Prime Beams & Baffles).


Architects can also use the way light plays on white surfaces to highlight curves and shapes, bringing more movement to a room. At Kitchener Public Library in Ontario, a Techstyle® White ceiling system offers geometrical dimension as shadowed origami-like folds play with the eye. The clever effects of white shadowing are also on exhibit at British Columbia’s Temple of Light at the Yasodhara Ashram, which was the vision of a pioneering North American yogi. It was left in ruins after a 2014 fire ripped through the temple, but the Canadian firm Patkau Architects constructed a new space that features a dome-like wood structure elaborately clad in large curved, prefabricated modular units in white to symbolize purity.

Light plays with white to impact shading in spaces

Of course, shades of whites are no strangers to window coverings in commercial and residential spaces, offering the flexibility to absorb light and brighten an area while blocking direct sunlight. White coverings were pushed to the max at the Peabody Essex Maritime Museum in Salem, Massachusetts. There, a customized integrated system of large-scale white shades hovers overheard, dramatically dipping down toward the public atrium below. The wave-like shades, part of Moshe Safdie’s major expansion of the museum, evoke the feeling of being on a large sailboat with blue skies and natural sunlight permeating the spaces between the draped white fabric. Like sails, the automated horizontal tensioned shades can furl and unfurl to offer maximum control of filtered light.

A post shared by Hunter Douglas Architectural (@fluentindesign) on Jun 1, 2017 at 7:04am PDT Odes to white by architects & artists

For an extreme example of white’s flexibility in shading solutions, check out MoMA PS1’s courtyard in New York, which showcases “Lumen,” by Jenny Sabin Studio, winner of the museum’s 2017 Young Architects Program. Over one million yards of robotically woven white fabric hangs from tube-like structures that form a white canopy with cut-outs, creating the effect of being inside a high-tech hive. Both natural daylight and projected illuminated colorful lights in hues like purple and red generate striking visual effects on the textured white fabric that acts as a shade for the institutions summer concert series.


The design community’s love affair with white can be seen at “Sara Berman’s Closet,” a white-themed exhibit at the Metropolitan Museum of Art that moves beyond interiors and architecture to make white the subject of a museum exhibit. It celebrates the neat, all-white wardrobe of Sara Berman, an immigrant who made her way from Belarus, to Palestine, to Greenwich Village, all the while maintaining a meticulously kept closet. The exhibit covers her closet from 1982 to 2004, showing hues that vary only slightly from cream to ivory to ecru. It reveals something bigger about an immigrant who took careful pride in the possessions she could afford. Organized by her relatives, the artists Maira and Alex Kalman, the show represents a woman honoring the color that brought her such joy, and that continues to transform not only fashion but design and architecture as well.

Watch this video on The Scene.