“A furniture showroom is a lot like a museum,” says Peter Freeman, of Freeman Kennett Architects. He explains that similar to conditions at an art museum, light control plays a central role at the 187,000-sq.-ft. Markor Art Center, located in the “Furniture Capital of the World,” otherwise known as High Point, N.C. The multi-purpose building houses the East Coast corporate offices of Chinese-based Markor International Home Furnishings Co., as well as showrooms for its subsidiaries, Caracole and A.R.T., two furniture brands with distinct personalities. While it was important to distinguish the unique style of each space from an aesthetic and functional perspective, the architect also wanted to create a sense of openness and flexibility throughout. The building is topped off with a stunning dome that lets light penetrate an entertainment area that’s intended to host High Point Market’s bustling activity. “The light is absolutely unbelievable and downright heavenly,” Freeman remarks, “But as an architect, we had to control that light… We looked to Hunter Douglas Architectural to help us really begin to control the light, and what’s more, the quality of light in the space.” 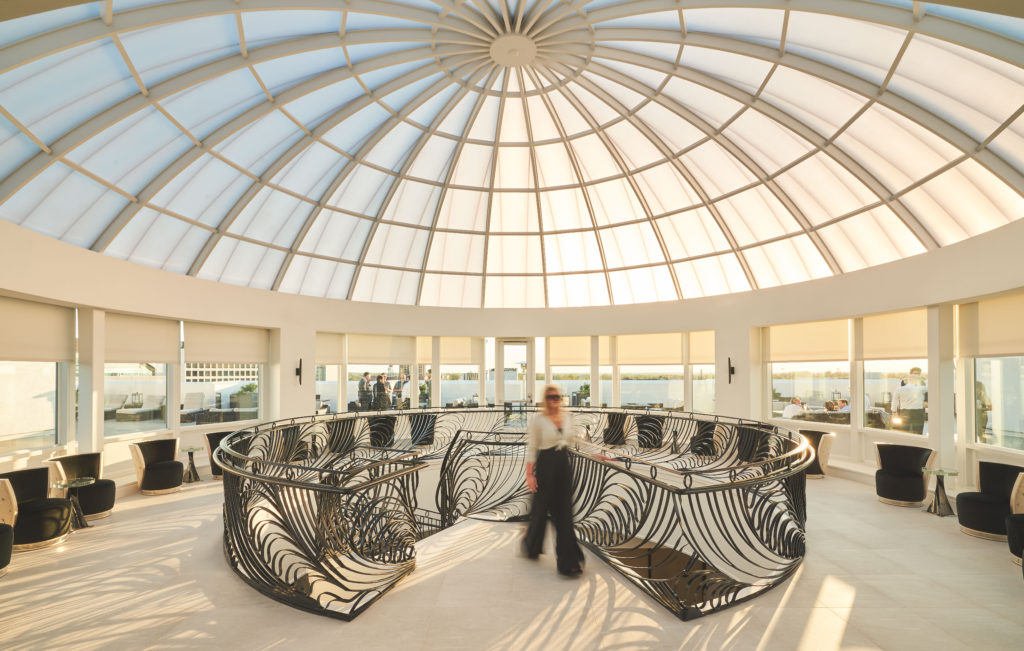 Freeman Kennett Architects, with general contractor New Atlantic Contracting, worked with Hunter Douglas Architectural along with Warco Construction on a custom installation of a series of 18 panels of RB 500+ Motorized Shades. The custom-engineered installation features 360-degrees of shades in Mermet’s E Screen 1% in White Linen, powered by Somfy. These are seamlessly operated by just 8 motors with 45-degree couplers, which allow the motorized shades to be connected together as they go around the circular room. 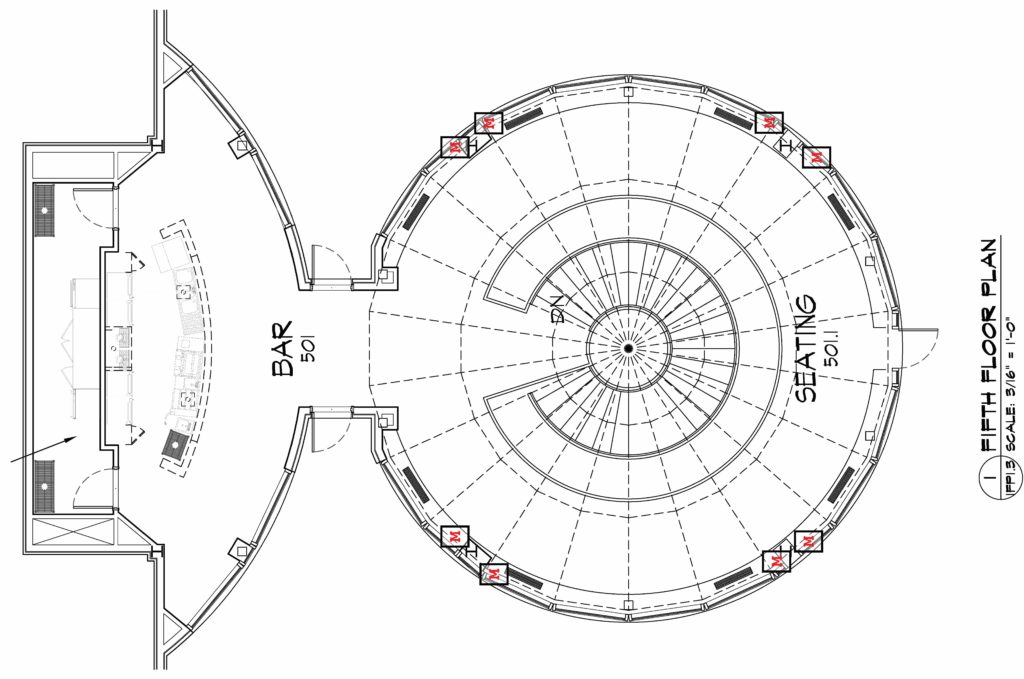 “Anytime you do a dome,” says Freeman, “the sun changes throughout the day, so finding a way to really control that and the quality of the light was important.” Similarly, in the A.R.T. showroom space, Southwest Wall Systems configured a custom curved, monolithic wall twist within the building’s external skin veneer, that soars 60 to 70 feet and also manages light entering the space.

Before embarking on the two-year planning and construction process, Freeman spent time with Markor’s founder and chairman, Richard Feng, who is an artist by trade. “He really drove the boat, if you will since he has a wonderfully creative spirit and imagination,” says Freeman. “One of the first things we talked about was really great pieces of architecture, so much so that we were invited to go to Los Angeles and look at The Broad Museum.” [The Broad Museum’s unique veil-and-vault design scheme uses Hunter Douglas Architectural TZ100 Zipper Tension System shades to illuminate the galleries below while protecting artwork from direct light. Likewise, light plays a key part in brightening a showroom while protecting furniture]. 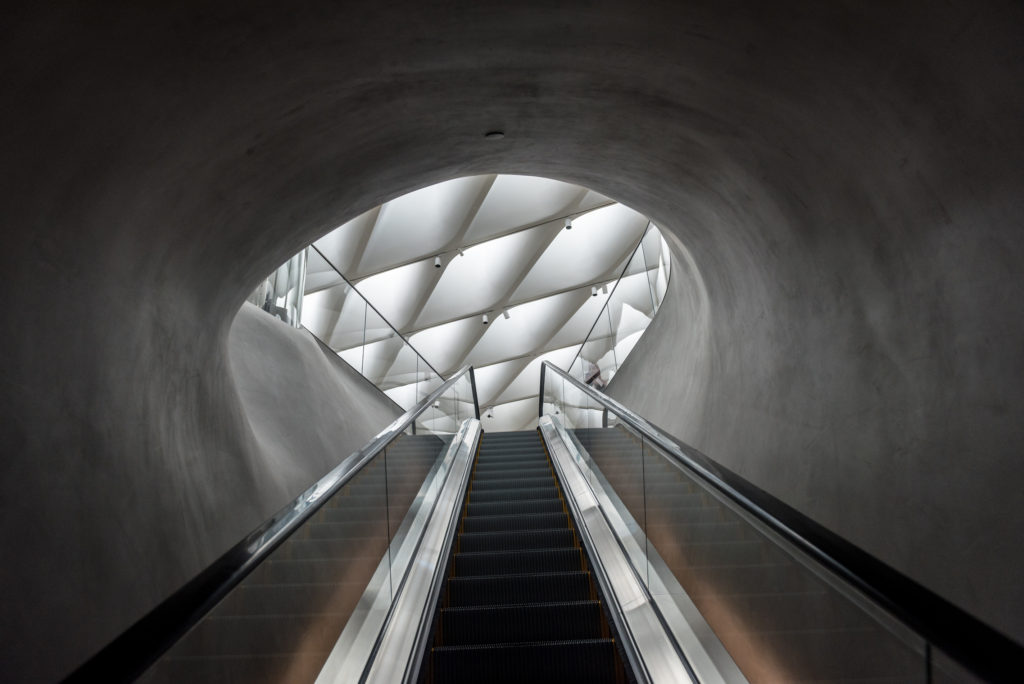 Next, the group traveled to China to visit ‘The Bird’s Nest,’ Beijing’s national stadium, as well as the brand’s retail stores. Freeman notes, “There was a lot of early research and design intent meetings that happened both here and in China to develop an aesthetic that seemed to be appropriate not only for the mother company but also something that was representative of both the A.R.T. and Caracole brands,” which he says Feng describes being like “whiskey and wine” in terms of materiality and masculinity.

The end result is a $20 million building that Freeman calls “a real showstopper.” With a 100,000-sq.-ft. East Coast distribution center nearby, the Markor Arts Center officially opened doors in April 2019, just in time for a High Point Market debut. The biannual event is the world’s largest home furnishings trade show, activating the city with an influx of 75,000 designers, manufacturers, buyers, and editors eager to scope out about 2,000 exhibitors throughout nearly 180 buildings. “The city doubles in size… it’s a lot of energy and activity,” Freeman explains, “As far as use goes, the building is really designed for the heightened presence during Furniture Market.” 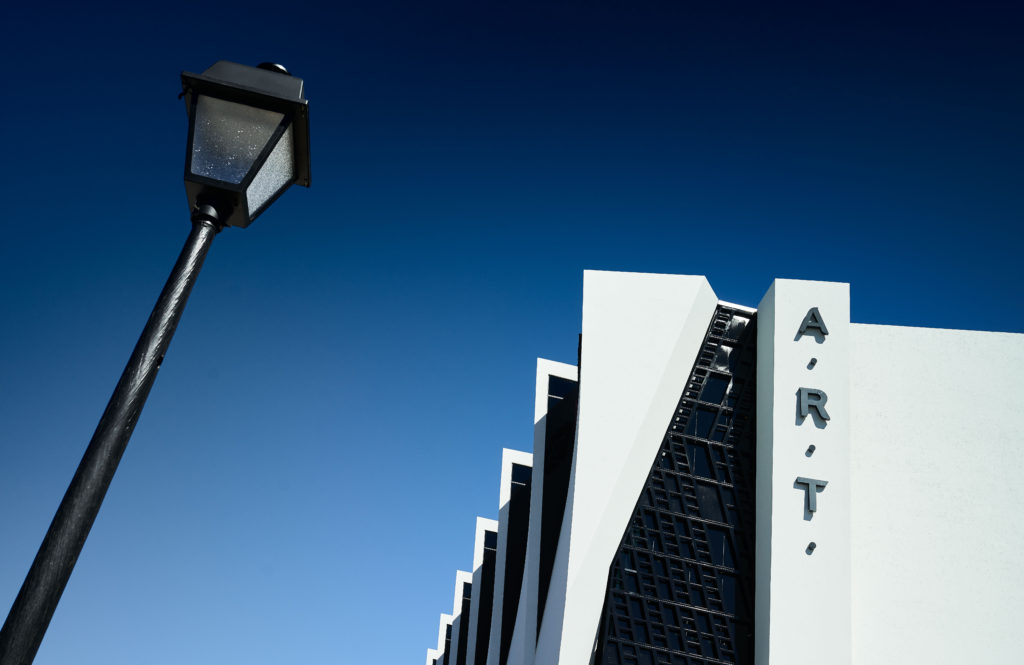 “In both of the lobbies at the downstairs level as well as the lobby on the fourth floor, we have these grand spiral stairs. At the bottom two floors, they penetrate through three stories with beautiful chandeliers that enhance the space. On the fourth floor, where you come in the lobby, out of the elevators on each side, you enter the space and it has this grand spiral stair that leads up underneath the dome.” The fifth floor’s rooftop skybar and terrace played host to a number of High Point Market events this past spring, including appearances by designers Bobby Berk, Kathy Kuo, Brady Tolbert, and Lori Paranjape. 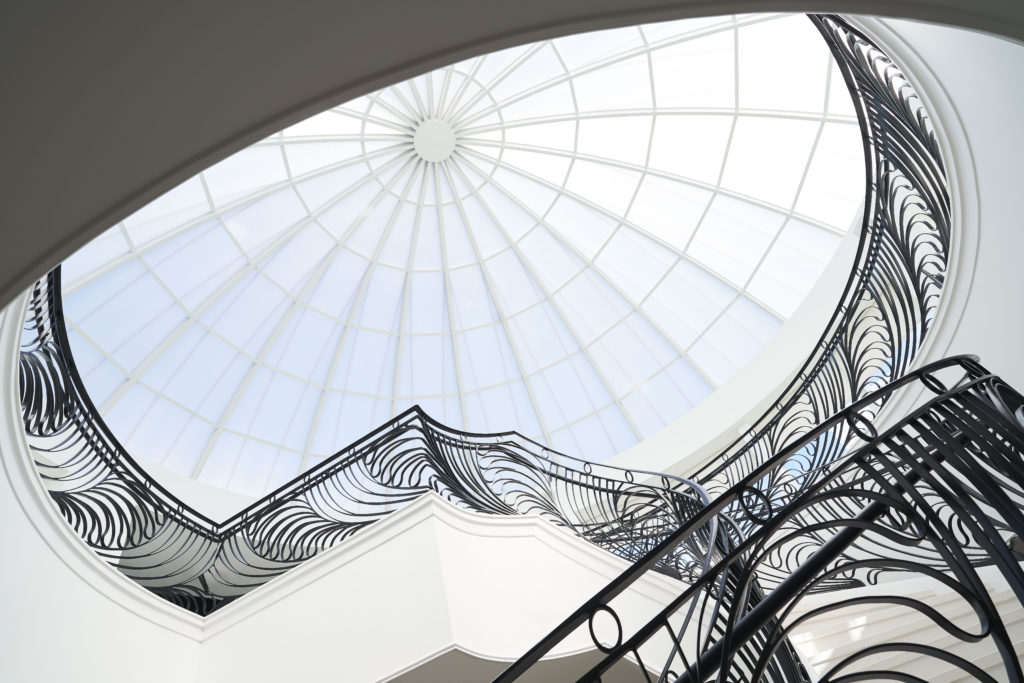 “It really is amazing to see the flood of light that penetrates that area” shining down from the dome above, says Freeman. However, he adds, “There was just so much strength that we had to think of ways to control the light without overpowering everything in the design. One of the things we did was use a translucent polycarbonate dome, which was a CPI product. But more importantly, we looked to Hunter Douglas Architectural.”

After an initial meeting, Carol Addison, Hunter Douglas Architectural’s southeast regional sales manager, wasted no time in getting on-site to review shading solution options with the architect and owner’s rep. She recalls climbing seven flights of stairs with a sales kit with a motorized shade sample, unplugging a power saw, and hanging the sample from a scaffold. The owner’s rep was able to experience the shade firsthand, which ultimately helped the team determine the shades needed to be motorized. “Originally it was supposed to be manual,” Addison notes, “but once the owner’s rep got the remote in his hand and saw the shades going up and down, he was fascinated!” Freeman notes, “The Hunter Douglas folks did a great job of providing us the samples and technology, making sure we had the materials, even though it was an incredibly tight deadline we were on.”

“I left from the site and went straight to Warco, our dealer’s office in Charlotte,” Addison remembers. “I laid out the architect’s set of plans on their desk, we figured out the quote request and had a quote to them in less than 24 hours… It was very cool to see it all come together in one afternoon. This came out of our standard facility, using the everyday hardware, and we were able to do something that was pretty spectacular visually and from an engineering standpoint. It gives you an idea of what we’re capable of,” Addison points out. “It was such a showcase project, which worked out very well because of the cool shape of the dome, and the fact that there are 18 panels and only 8 motors, and it’s a complete circle – the whole nine yards.”

“It’s really a Hunter Douglas Architectural solution – no one else can do that type of coupling,” says Rick Tanner, window treatments division lead at Warco Construction. “The hardest part was converting the shades from a standard coupling to a 45-degree coupling, and that went very smoothly with no issues. It was too much of angle for a standard coupler, so we had to modify the shades and add in those 45-degree couplers,” he explains, adding, “we made sure to keep all the shades operating roughly the same speed… That particular project definitely would have been difficult for someone that wasn’t prepared to do a lot of custom work.”

Tanner notes that in a high-traffic entertainment space, “manual shades would be a distraction…To have all the hembars nicely aligned all the way around the room, and to be able to move those shades without creating a distraction, is so great – I couldn’t imagine it without motorization.

“We had to come up with a system that was concealed, that didn’t create a negative visual impact on that space,” Freeman says. “The dome has such a quality in and of itself that you didn’t want anything to begin to disrupt the geometry that we had begun to imagine, so having the built-in shades with the low-voltage power with hidden motors became a great solution.”

Freeman says that in many ways, the new Markor Art Center is “like a Chinese fan that opens up” since “controlling light and views in the building has been an important aesthetic concept” from the initial design.

The fan-like design of the new Markor Art Center controls light and views in the building. Image courtesy of Michael Blevins

“One of the things that you don’t want to do in a furniture showroom is, if you have wide open glass, you’re not controlling the light. You get glare that comes in, hotspots and reflectivity that happen off of the furniture that you’re trying to display, which you don’t want.” To that effect, the architect worked with Southwest Wall Systems to specify a “curved glass that creates triangular windows that light the inside of the walls, without allowing light to penetrate deep into the building.”

Freeman finds personal reward in the reaction from both Markor and the public – “everybody’s super excited about it.” He says getting to work for a creative-minded client like Markor’s founder Richard Feng only adds to the push to do an outstanding job, “and I think that shows not only in the shades and the dome but truly the entire building.”